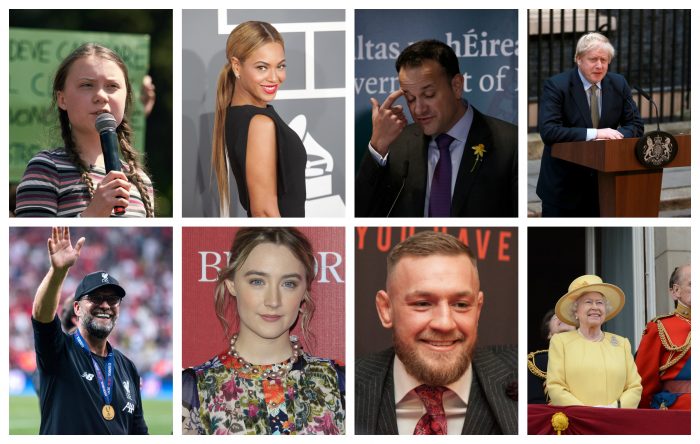 EARTH’S leading lights were kind enough to share their New Year’s resolutions with WWN and we’re delighted to be able to share them with you, the filthy members of the public who aren’t good enough to be used as toilet paper by any of them:

“Win that fucking Oscar for a start. Then my toughest role yet – settling on an accent” – Saoirse Ronan

“Now that people are finally waking up to the fact that fossil fuels could be the death of us, it is time for the next phase of my climate crusade… hoovering up shares in oil companies as they drop to record lows” – Greta Thunberg

“Not so much break every one of my promises, but actually follow through on every one of them and make sure the devastating consequences are felt by everyone except for me and my friends” – Boris Johnson

“Get fit and healthy? Nah, fuck it” – majority of the nation.

“This year is going to be my year, I can sense it” – unnamed celebrity whose career is ruined after scandal comes to light.

“Ireland for the Irish” – growing boil of rage on the verge of exploding and covering everyone in its vile mucus aka Ireland’s racists.

“Whatever it is, middle class white girls are going to loooove it” – Beyoncé

“No more interviews anyway for a start. Ok, maybe one more, just to clear things up” – Prince Andrew

“We’ve listened to the Irish public, and they couldn’t be clearer in how they prefer my party to that of our rivals. Roll on the general election, where the decision is clear. Two, completely different parties with incredibly divergent ideals and policies” – Leo Varadkar/ Micheál Martin.