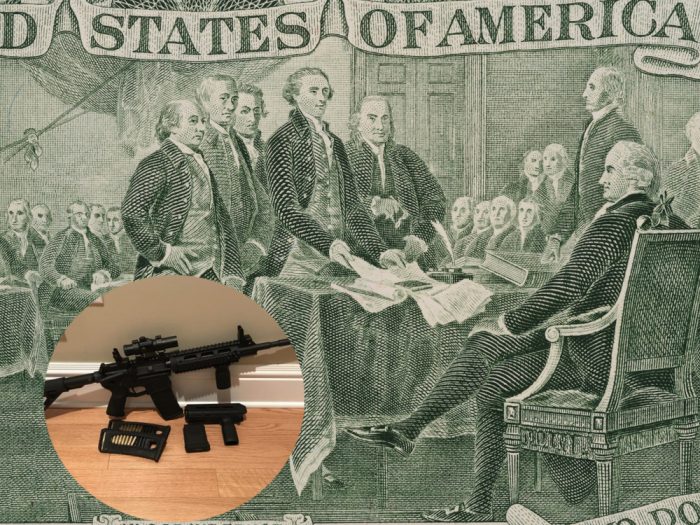 GEORGE Washington, Alexander Hamilton, Benjamin Franklin; just three of the ‘founding fathers’ of America, who wrote the very document which shaped the United States into the nation it is today. And, if new research has shown, three men who loved nothing more than the smell of a warm assault rifle, fresh from a delivery of red-hot lead.

Although enemies of the state would have you believe that the founding fathers did not have assault rifles in mind when they passed the 2nd amendment to the US constitution back in 1791, and that the bill itself has failed to keep up with technology that went from single-fire muskets to expertly-crafted 100-round magazine drums which never jam and can be loaded and emptied with ease, a recently-unveiled document has shown without doubt that even Thomas Jefferson himself was a fan of the Armalite AR-15, the smoothest assault rifle on the market.

The research, funded exclusively by the NRA, has put to bed any doubts that average, decent Americans may have had about foolish proposals to ‘ban guns’, or ‘stop selling guns to anyone who wants a gun’, and will surely pave the way to a gleaming new future where everyone has the reliability and peace of mind that comes with the AR-15; truly one of the most wonderful products has ever gifted to the world.

“I hereby state that semi-automatic weaponry be’ith the right of every man, woman and child in America, with the exception of some black people and most Mexicans” read the newly found document, which is miraculously preserved despite its age.

“Especially the lightweight magazine-fed AR-15; truly a dream weapon. Alas, this weapon IS but a dream to us poor folks in 1790-odd, but to any American that lives in such an enlightened age where such a weapon is available, we suggest you travelleth to your nearest Walmart or equivalent store and pick yourself upeth one now”.

Lefty nutjobs have questioned the validity of the document by pointing out that it appears to have been printed with a HP laser printer, but such claims have been debunked by the fact that if the founding fathers wanted a printer, God would have surely given them one.