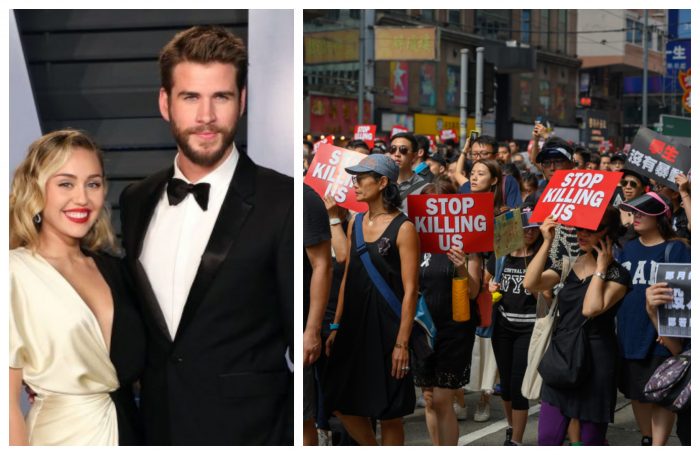 RUMOURS circulated by those closest to Miley Cyrus and Liam Hemsworth have suggested that their recent split, subject to phenomenal scrutiny by the media and public alike, has come about all because of the pro-democracy protests in Hong Kong which have been met with force by Chinese authorities.

Just like Miley and Liam’s relationship came to a stop, so did flights at Hong Kong International Airport yesterday as protesters occupied airport terminals desperate for their voices to be heard and the status of Hong Kong and its democratic freedoms to be respected by Xi Jinping and his ruling Communist Party of China.

Was Miley passionately pro-Hong Kong and just couldn’t let such a big difference in beliefs go? Did Liam support Carrie Lam’s servile deference to China? Where will the shared pets end up? Will Hong Kong authorities, emboldened by China exerting its pressure on them, continue to violently suppress political protests? Will Miley’s next single turn this personal turmoil into a powerful ballad that could define this era of pop?

Or is it more likely that in this increasingly attention-deficit world, publications have to draw people into reading about major international events of huge significance by dangling the juicy celebrity cherry?

Were you tricked into reading this, much in the same way the people of Hong Kong were tricked into thinking its special status, which meant it enjoyed more political, economic and social freedoms than mainland China, would last forever? Who knows.

‘Hey, it is possible to read about Miley AND Hong Kong so stop acting like we’re idiots by judging us’ you may point out, but who are you kidding you’ve spent more time analysing Miley’s clapbacks on Instagram than you have Chinese gangs brutally assaulting protesters while world leaders do their best to ignore it.

Hong Kong citizens are protesting to protect their guaranteed rights to freedom of assembly and freedom of speech, something Miley can identify with these days as her every move on social media is watched over and devoured by the media and public.

Did Miley’s support of Hong Kong prove to be the final straw with Liam? No, of course not, but since you’re hear you should know that Hong Kong opponents of China’s ruling party have effectively been kidnapped by Chinese authorities and illegally extradited to China. Human rights violations and suppression of people’s freedom is scary stuff but as scary as the thought of a dreamy Hemsworth being sad? We can’t say.