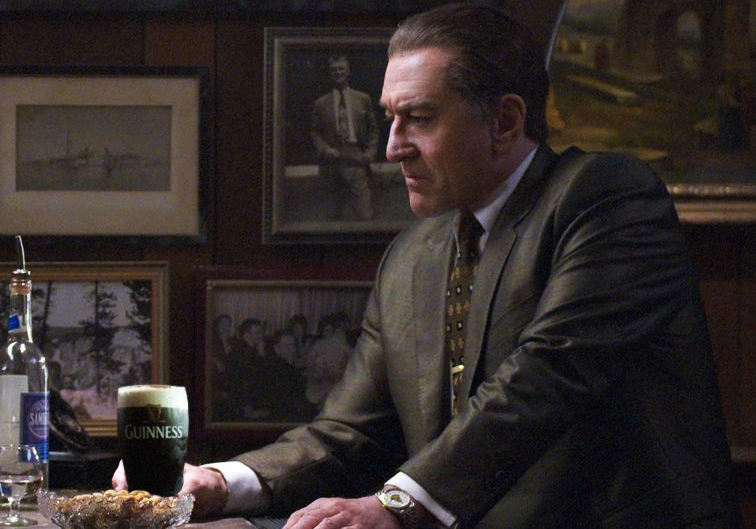 MARTIN SCORSESE’S highly anticipated movie ‘The Irishman’ has taken the internet by storm as buzz for the movie reaching fever pitch with the release of a trailer which surprised fans who presumed the film, which stars Robert De Niro, Al Pacino and Joe Pesci, would be a gangster film.

In what Robert De Niro has described as the most challenging role of his career, the acting legend will play Michael Finnerty, a miserable Clonmel native who’s fond of the pints and complaining about the weather.

“I got caught in that rain earlier, looked like a drowned fucking rat so I did. Quare weather for ‘summer’. What passes for summer in Ireland anyhow,” De Niro is seen saying in a flawless Tipp accent in one of the trailer’s more evocative and tense scenes involving Finnerty, a monosyllabic and emotionally stunted Irishman who grouses about the weather non-stop.

The ambitious movie spans decades and producers Netflix have spent $200 million on state of the art CGI ‘de-aging’ technology, allowing De Niro to play Finnerty as a man in his 20s all the way through to his 70s sculling pints at the end of the bar and making agonisingy banal and consistently negative small talk about rain, wind and sun.

Pacino features as a local farmer who De Niro has no time for at all at all but humours him all the same.

“Paint houses? In this weather? Your some fool. You’d be kilt by the sun, ’tis no weather for hard labour,” De Niro says to Pacino’s Sean McElhinney in another scene which easily showcases why The Irishman is one of the most hyped movies of 2019.

Pesci as always stars as a psychopathic mob figure you don’t want to cross.