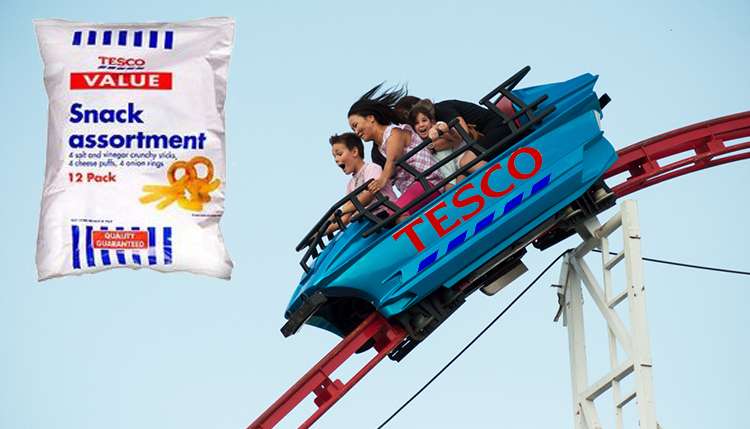 FOLLOWING on from the success of Ireland’s Tayto Park in County Meath, supermarket retail giant Tesco has today opened a 2,000 acre amusement park based on their ever popular snack assortment pack.

Bringing you all the thrills and spills associated with a low budget variety of savoury snack choices, the latest crisp themed entertainment village features all of the most popular attractions for your family to enjoy, including the world’s first 3d printed rollercoaster.

“We’ve managed to kit out the whole park on a €3,000 budget,” mascot for the new park Mr. Tesco Snack Assortment Pack told WWN, dressed in his recognisable blue and white striped shirt. “A family ticket to the park costs only 3:99 with each family member getting 5 blue tokens to use however they please through the park”.

“My favourite has to be the bumper trolleys,” he said, “they may look like normal Tesco trolleys with old tires around them, but boy, they sure are fun”.

To avoid soaring insurance costs and claims, Tesco Snack Assortment Pack revelers must fill out a form which waives all liability.

“It’s a risk you have to take, but the kids absolutely loved the self-service bungee jump,” said mother of two Janet McHendry, who chipped her elbow on the slippery isle ride.

The Tesco Snack Assortment Pack is now open to the general public and is expected to generate €23.78 to the local economy over the next 12 months.