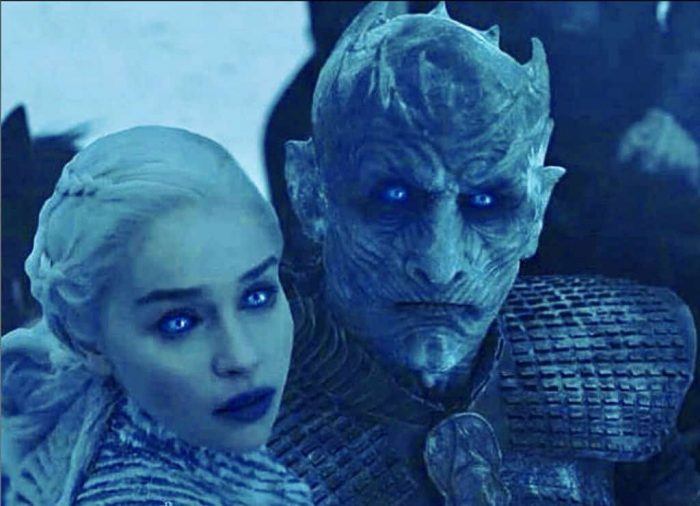 We’ll get started with the recap in a minute but first we need to lie down to recover from all those shocking twists and turns!

In the opening scene, Drogon lands on a deserted beach clutching a deceased Daenerys, but who’s that in the distance… surely it can’t be? The Red Witch, who audiences were fooled into thinking was dead, is there to bring Khaleesi back to life.

In a series of interwoven scenes scored by the always epic GoT music, we see Cersei in the crypts of King’s Landing, reanimated Mountain-style by a heartbroken Tyrion who studiously follows Maester Qyburn’s book on ‘how to reanimate a corpse for beginners’. A now purple Cersei looks seriously pissed off in her new state and just grunts inaudibly as a bubble of mucus pops from her nose.

Daenerys comes back to life with an almighty gasp just like Jon Snow did in series 6. Holy shit! The game of thrones is well and truly back ON!

“Oh my God, I totally still love Jon and we should rule together and have loads of steamy kisses,” Daenerys says, in just one instance of dialogue which GoT creators strongly deny was hastily written in the last week to appease critical fans.

Bran spends much of his time as ruler of the 6 kingdoms, making everything wheel-throne accessible around the kingdom and insisting on ramps everywhere. GoT fans may have doubted him but it looks like he’s making a half decent leader, despite his stance on same sex marriage.

However, the rebuilding of King’s Landing goes way over budget after Tyrion, distracted by playing Dr. Frankenstein, rushes through the procurement and bidding process.

Instead of listening to experts and building on a greenfield site on land already owned by the state, Tyrion pushes through with the original plan which now costs ten times the initial estimates and includes a ridiculously high number of wine bars for the new city. Greyworm calls for his resignation before launching his own political party which will now focus on getting King’s Landing to leave the union.

The master of coin, Bronn, is no help to Tyrion after focusing all his attention and the crown’s money on opening a series of brothels called Westerhoes.

In the episode’s most moving and tragic scene, Arya, while on board on a ship headed west ‘where the map ends’ falls straight off the edge of the planet after coming to the end of the flat earth’s surface.

Sansa, now emboldened by becoming ruler of the North, struggles to find a man worthy of taking his place alongside her and reluctantly agrees to go speed dating.

Daenerys flies north of the wall to live happily ever after with Jon, who needs some comforting after Winterfell Animal Welfare took possession of Ghost and put it down. Could they be headed for Westeros in the next episode?

The final scene of the episode sent fans wild and sets up episode 8 next week perfectly. On the grounds of Winterfell, next to the weirwood, the icy pieces of the Night King lay dormant. Silence… there is a flicker of movement and the ice draws itself together in a kinetic movement, slowly rebuilding the Night King.