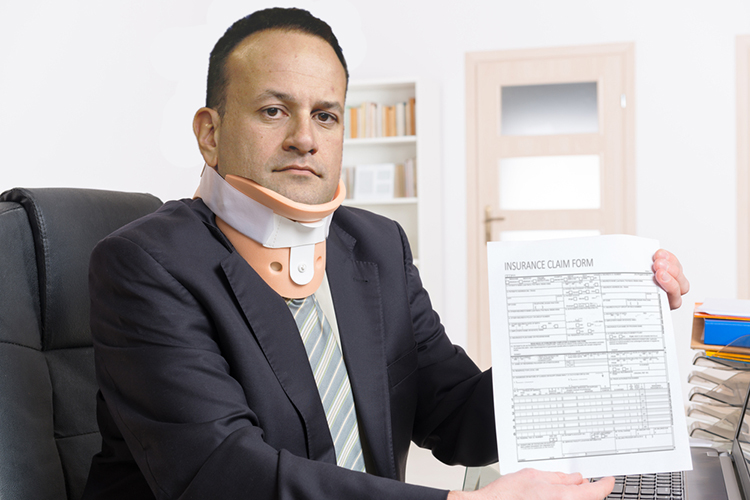 FINE GAEL has filed a personal injury claim against the people of Ireland, following injuries sustained when the country took an unexpected turn away from the party during local and European elections.

The party, headed by Taoiseach Leo Varadkar, claims that the sudden and forceful move by the electorate towards the Green Party caused severe whiplash to not just FG, but FG supporters as well.

As well as a sharp pain in their necks, previously thought invulnerable to injury due to their cast-brass construction, Fine Gael have stated that the incident has left them with severe depression, with some TDs and former MEPs and councillors barely able to get out of bed in the morning.

“There’s a few suspicious things about this claim,” said Judge Conall Whelan, going over the file while preparing for the hearing of the multi-million euro suit.

“Number one, FG claims the sudden turn was unexpected, but that doesn’t jibe with the last years’ worth of opinion polls. Were FG holding on properly? It says here that they had a HSE scandal in one hand, and a housing crisis in the other. It doesn’t seem likely that they were ‘in full control’ at the time of the incident, like they claim they were”.

“And then there’s their actions after the election; it says here that Taoiseach Varadkar went out after the vote and talked shite about how a vote for the Green Party shows that the people of Ireland have an increased desire for action against climate change, whereas what actually happened was the people of Ireland are sick of Fine Gael, pure and simple. It’s unlikely that Varadkar would be able to attempt this kind of spin if he was suffering the injuries I see before me”.

The ongoing case highlights the worrying ‘compo culture’ trend in Ireland. Should you be aware of anyone who has recently attempted a bogus claim against a business, please dob them in HERE.