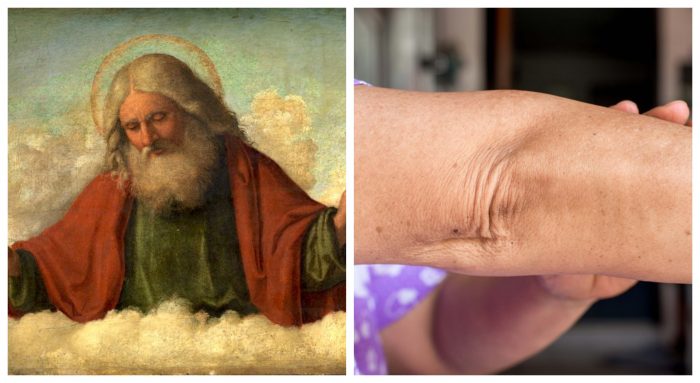 BREAKING His longstanding silence to answer queries from the general public, God Almighty has apologised for the first time regarding that saggy bit of skin on humans’ elbows.

“I may have been distracted when I made that part, and for that I’m sorry,” God stated before admitting his concentration and efforts mostly went into perfecting breasts, penises and bums.

That saggy skin on elbows, which can often be very dry, ugly looking and needlessly stretchy has been heavily criticised by humans over the past few millennia with it becoming the more horrifying the older a human gets. However, many are thankful God has spoken out on this, of all issues.

“The apology is better late than never,” offered one human, Lorna Griffin, “but at the same time, what was he thinking with elbows at all at all?”

The elbow, one of the few parts of the human body humans rarely have cause to closely examine, almost always sends chills down the spine when properly looked at.

“It’s just….fucking weird isn’t it. Like I get it’s sort of like the hinge of a door, but so is the knee but doesn’t have all that excess skin that just gathers and bunches,” confirmed one person, who regretted contemplating the oddity that is the elbow.