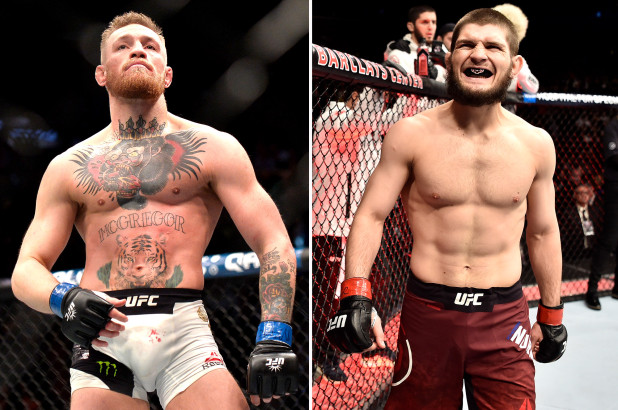 WE’RE tantalisingly close to Conor McGregor gracing the octagon once again, only Khabib Nurmagomedov stands in his way of a victorious return to the UFC.

No better way to gain the upperhand in the mind game stakes then by wrestling Crimea from the hands of Russia. He will however, not give the disputed territory back to Ukraine until it buys 1,000,000 bottles of Proper 12 whiskey.

Tasteful put down about Khabib wearing a suicide vest and blowing everyone up, on account of Khabib being a Muslim

Nobody can compete with the Notorious! The legend does it again! Haha, banter! While we never second guess the Notorious, we hope he mentions how he wants Khabib to die in a Gulag but strays away from being too harsh on himself for posing for photos with noted homophobe and all round threat to world peace, Vladimir Putin. We’ve all been there.

In a marketing tie-in we have been told to expect, McGregor will put a rag in the neck of his Proper 12 Whiskey bottle, light the rag on fire, throwing the Irish twist on the Molotov cocktail at Khabib and his crew, killing them all.

While we will lose a great fight at UFC229 thanks to these deaths just think of the viral videos, gifs and memes that we will get out of all of this.

4,567 more mentions of a new whiskey which has recently come onto the market

This shit ain’t gonna sell itself.

Criticising the fact that McGregor will do this while driving a bus through the doors of the press conference auditorium at 90 miles and hour is just mean-spirited nitpicking.