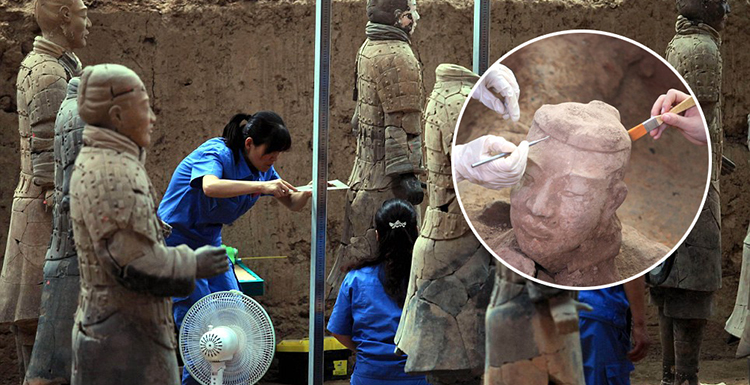 A SHOCKING new paper published by some of the world’s leading archaeologists claims that the Terracotta Army depicting the armies of Qin Shi Huang, the first Emperor of China, were actually a new creation and not from the late third century BCE.

Using state of the art laser dating technology, scientists found that the three pits containing the Terracotta Army were actually created by excavating Chinese archaeologists in the 1970s.

“Excavating is a very long and tiresome process and we do not believe the archaeologists set out to fool anyone initially,” German scientist Gunther Hans told WWN, “this was more a case of their subconscious minds creating the 3D sculptures out of the rock, as opposed to them planning to create 8,000 soldiers, 130 chariots with 520 horses and 150 cavalry horses with their tools.

It is alleged that the team began brushing away soil in an effort to gently reveal what was beneath the surface.

“It still doesn’t take away from the sheer scale of the Terracotta Soldiers, it just means they’re not as old as everyone thought,” he added, “but what it does mean is that we need to start checking other sites like the Great Pyramid in Giza – who knows what’s real or not anymore?”

Apologising profusely for the misexcavation, discoverer and archaeologist Zhao Kangmin said he couldn’t say how sorry he was over the mix up, pointing the blame to over eager young archaeologists, including himself.

“We must have just gotten it into our heads that the site was a pit of sculpted stone soldiers and just got carried away with ourselves,” Kangmin defended, “we were all very young back in 1972 and we took a lot of acid, so I guess we just kind of created the Terracotta Soldiers ourselves without knowing it.

“It does make sense now that I think about it, why would anyone want to do such a thing, it took us decades to do,” he added, “at least now we’ll get the praise for the work, but emotionally I’m conflicted”.

UPDATE: The Chinese government later arrested Kangmin and his team and sentenced them to death.