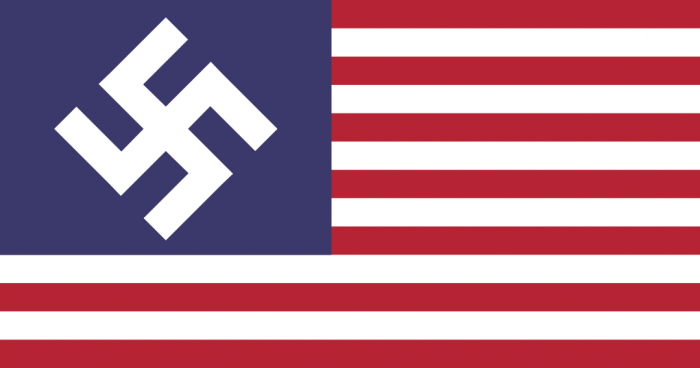 THE WHITE HOUSE has, on this the day of America’s 242nd year of independence, unveiled a new updated flag which better reflects the nation in its present form, signalling the aspirations it has for its ever bright future.

“Nobody likes change, but we remind people the old flag didn’t always have 50 stars on it, you will grow to love it in time,” a White House spokesperson shared at the unveiling.

The striking update sees prominence given to a religious symbol which denotes peace, something the deeply religious people of America will welcome with Trump devotees already asking people opposing it to try and see things from their perspective. The flag will be mass produced outside of the United States.

“Our twin pursuits of religious harmony and peace dovetail beautifully, just beautifully really, just as our founding fathers totally wrote about in the Constantinople of the United States of America,” a visibly moved President Donald Trump said as he unveiled a prototype which was designed by the best racially pure artists in the country.

Over the coming hours the new flags will be sent out to public buildings, schools and local businesses with those refusing to comply with flying the new flag to be sent to a facility were they will relearn what it is to be American.

For some, the flag represents just the latest, seemingly imperceptible change to American freedoms, laws and society which is setting the country on a regrettable path from where it may never return.

UPDATE: Those who oppose the use of the flag have been asked to register their complaints via website set up by US authorities, making sure to include their address, date of birth, a list of all their relatives, their ethnicity and political allegiance.