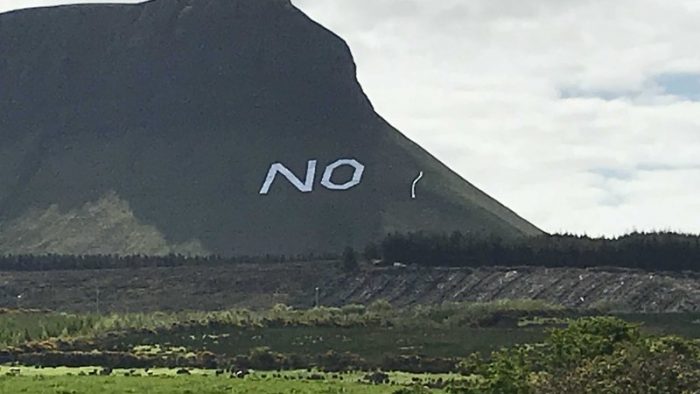 FAMOUS mountain and landmark Ben Bulben, which has its own thoughts, has been left red faced after it was discovered it hadn’t registered in time to vote in the upcoming referendum, this after it went to the trouble of writing a large ‘NO’ on itself.

“Ah that is embarrassing, to go to that trouble to paint yourself and you didn’t even register to vote,” remarked one No voter who was on the mountain at the time, “I expected more from my local geographical features and tourist attractions, we need every vote”.

The mountain, which has its own thoughts and feelings, apparently let out a ‘large cry’ early yesterday morning according to impartial No voters on the scene, who are fluent in mountain, and joins an expanding list of Irish mountains, loughs, cliffs, beaches and roundabouts advocating for a No vote despite not being registered to vote themselves.

In yet another shocking twist, Ben Bulben has now removed the ‘NO’ lettering from itself, and confessed to a change of heart after reading up on the referendum.

“I feel stupid, not even registering like, I had the forms and everything,” Ben Bulben explained.

“But look it, I had a chat with a few women who went for a stroll up me there this morning, and aside from making tea and sandwiches, women do other things, like convincing people that we should afford compassion and care to women in Ireland who are enduring difficult situations and pregnancies, and not just send them to England. So I’m actually a Yes now,” said Ben Bulben, because as previously stated, mountains can speak.

Omitted from media reports, for reasons not yet clear, are sections of the Ocean FM interview with men on the side of the mountain yesterday which included the following undoctored and genuine quotes that are so fanciful a publication simply could not make them up:

“55 million babies are murdered in Ireland every year” and “no one listened to the Nazis in Germany when Hitler was trying to kill them”.

Elsewhere, the Cliffs of Moher released a statement informing people “don’t even fucking think about coming near me with big letters”.