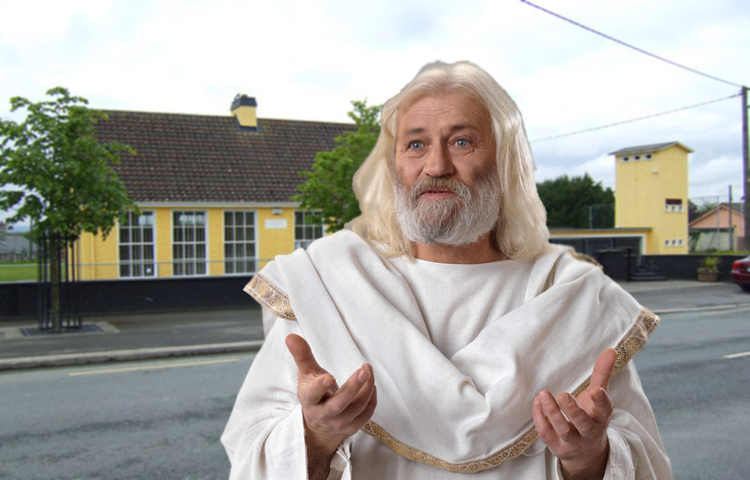 A HIGH Court ruling has implemented a ban on the creator of the universe, God, after a series of public complaints claimed the 4.5 billion-year-old was loitering around the majority of schools in the country.

In the ruling this morning, Judge Peter Kelly ordered the Almighty to stay at least 1,000 meters away from all primary and secondary schools in the Republic of Ireland and that he is to sign in at his local Garda station every day for the foreseeable future.

The ban comes at the end of a 6-month trial which saw thousands of witnesses take to the stand in a bid to prove that God hanging around their children’s schools was unnecessary, and “a little bit creepy”.

“He would sometimes get the children to genuflect as they entered the school,” one mother told the court, “he would even make them pray to him before and after lunch, and once they became of age, he’d insist they wear adult clothes, with little girls donning wedding dresses and the boys, suits, and then parade them around in some kind of sick perverted ritual.

“I just feel disappointed in myself that I let it happen to my own children after going through it myself,” she added, “I suppose it’s some kind of Stockholm syndrome”.

In his defence, solicitor and archangel Gabriel told the court that his client had become a little detached over the last 100 years and didn’t realise the difference between Church and State, as he has been in care since July 28, 1914.

“My client has agreed to house arrest and will only stay around churches and places of worship where he belongs,” Gabriel told the judge.

Judge Peter Kelly took all the evidence into account before passing a four thousand year suspended sentence, “on the grounds that he doesn’t reoffend”.