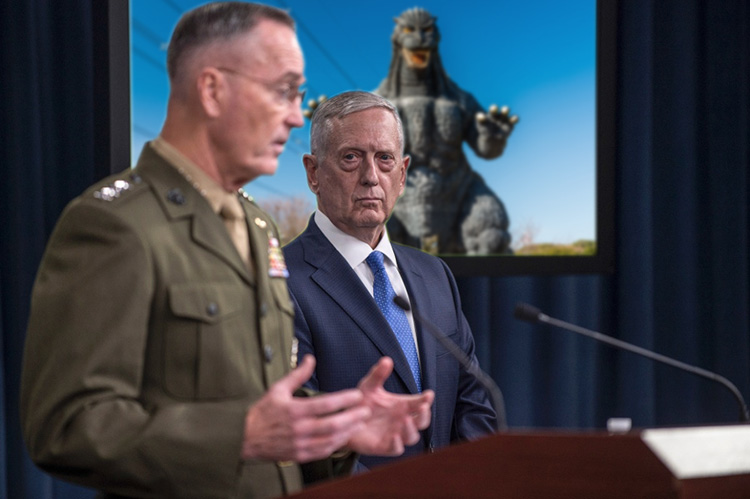 THE United States have issued a stark warning to North Korea about the level of retaliation they will face if they attempt to attack US citizens or bases with any form of gargantuan mutated monster, following intel from Pyongyang that the DPRK has come into possession of a Godzilla.

“We have received a dossier that North Korea may be about to unleash a Godzilla, or possibly a Rodan on US naval warships in the Pacific Ocean,” stated President Donald Trump, clearing his schedule from any investigations into irregularities with his administration so that he could properly address the developing Kaiju crisis.

“The American people will not stand idly by and allow a dictator such as Kim Jon-un to threaten our way of life with a massive, city-stomping, fire breathing lizard creature, okay? Everybody, we need to concentrate all our attention on this. The entire west coast is at risk… have you seen the size of these things? Huge. Trust me”.

The statement was met with scepticism from many opponents of the trump administration, who stated that Godzilla was a creature who was more connected to Japan, not North Korea, and that the North Korean administration had neither the capacity nor the resources to create a Kaiju of their own, even a shit one like Baragon or Megaguirus.

Nevertheless, Trump pledged to divert huge amounts of funding into the US Space X and Mechagodzilla program, promising to meet any North Korean Kaiju attack with ‘massive firepower’ the likes of which the world hasn’t seen since Destroy All Monsters.