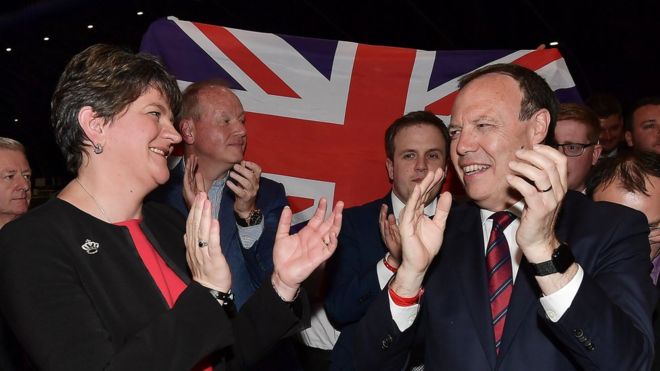 AS TALKS on forming a minority government continue between the DUP and Tory parties, WWN has obtained an exclusive look at the demands the DUP are making in order to keep Theresa May and her party in power.

While negotiations are ongoing, this leaked memo has given British voters and political anoraks around the world a look at some of the possible concessions the Tories will have to make in order to have the desired support for their shambolic and panicked Brexit plans.

Divert all climate change research funding into building a time machine so the DUP can travel back to 1690 to witness the Battle of the Boyne, with a quick pit-stop in the 1950s along the way.

The brief line in the memo doesn’t go into any further detail but one could be open to speculating on its meaning. DUP, a strong opponent of frivolity and joy of any kind may be seeking to ban gaiety from all aspects of Northern Irish society.

Save Ulster from Sodomy

Ah, okay, the last point is starting to make sense after reading the subsequent 79 paragraphs. The DUP has requested abolition of all formal education in the North, replacing it instead with 12 years of training children to save Ulster from sodomy, reigniting a campaign the then Ian Paisley-led party ran in the 70s and 80s.

Additionally, the DUP would like to install a large speaker system on the streets of Northern Ireland that plays the message ‘this is the gays’ fault’ every time it rains.

Seemingly a non-negotiable demand from the DUP, who would like to see the right kind of corruption, Protestant corruption, to be legalised so party members wouldn’t have to go to the trouble of setting up offshore bank accounts to hide money they may or may not have received as part of normal, every day, political work.

Each newborn child would be issued with a Union Jack onesie and made to wear it throughout the first year of its life, regardless of political or religious affiliation.

According to the DUP and their leader Arlene Foster, women shouldn’t be trusted as highlighted in the memo’s section entitled ‘Hmmm…women’. Improving upon current laws operating in Northern Ireland, abortion would remain illegal with the additional crimes of saying the word ‘abortion’ and thinking about abortion also outlawed.

The key issue at the centre of the election in the first place. The issue that will define Britain for generations to come. An issue so huge, the world watches on with bated breath for even the faintest glimmer of hope that it won’t be as cataclysmic as feared. The DUP have been clear on the issue in the wake of the election, stressing that they’re not all that bothered as long as the gays aren’t happy.

The DUP have demanded a monthly phone call from the Queen in which she says the words ‘One loves you’ at least 5 times.

The DUP are seeking to extend the parade route so it includes a stroll through Gerry Adams’s sitting room. They would also like to extend the duration of the parade from July 12th until July 11th the following year.