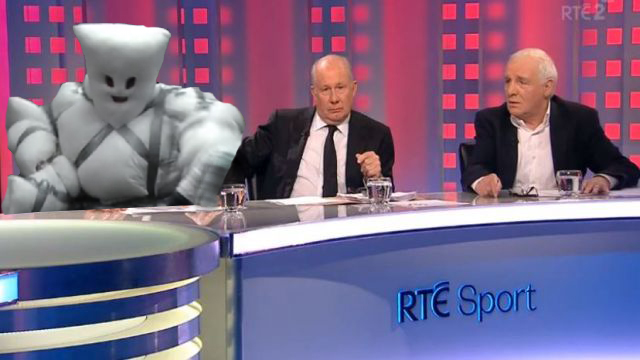 FOOTBALL pundit Eamon Dunphy is struggling to cope with the departure of long-term broadcasting partner Johnny Giles, according to sources in RTÉ that claim the 70-year-old has constructed a “new Johnny” out of pillows and a face drawn on a paper plate.

Sunday’s Euro 2016 final marked the last appearance of Giles on the RTÉ Sports panel, after a 30-year relationship that covered all of the Republic of Ireland’s major tournament appearances. There were emotional scenes at the end of last night’s broadcast as the members of the panel bid farewell to Giles, with the normally hard-faced Dunphy seeming to be particularly heartbroken.

In a bid to cope with the loss, Dunphy is believed to have robbed one of Giles’s suits from the RTÉ wardrobe, stuffed it with pillows and cushions and drawn a crude face on a dish, which he has stapled to the ‘head’.

Soon after constructing the effigy, Dunphy was seen arguing with “Giles 2” about the shambolic state of the FAI, and the manner in which Roy Keane was vilified after the Saipan incident.

“We all have different ways of coping with loss,” said one RTÉ official.

“If Eamon wants to make a new Johnny to argue with, then we just have to leave him to it. It must be said, some of the analysis coming out of the dummy is nearly as good as the real Johnny used to come out with”.