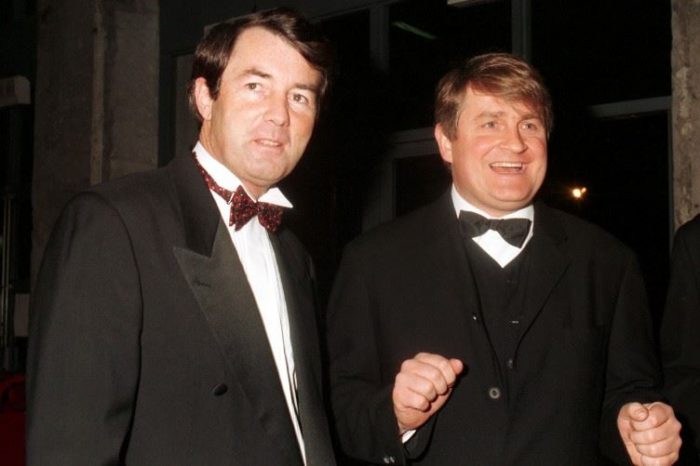 WHILE few people have forgotten the Moriarty Tribunal, the tribunal of inquiry into the financial affairs of both Charles Haughey and Michael Lowry, many can be forgiven if the details contained within the 1500 page final report are at this point a bit hazy.

Interest in the riveting and hilarious tribunal has been reinvigorated after the news emerged of businessman Denis O’Brien seeking legal action against RTÉ following Oliver Callan’s appearance on the Late Late Show recently. Callan is alleged to have had used sticks and stones and names that will never hurt anyone.

The Tribunal was established in 1997 and published its final report in 2011, and dealt in hilarious detail with the controversial awarding of the second mobile phone licence to Esat Digifone.

WWN is on hand with a helpful guide to the top 5 lol-tastic quotes contained within the final report of the Moriarty Tribunal for those with short memories. The passages below are amongst the most comic and tragic on record:

5. “Such improper benefits and payments as have been shown, in the case of this and the McCracken Tribunal, to have accrued to Mr. Lowry never reached the monetary scale or degree of fruition obtained by Mr. Haughey. But, in the cynical and venal abuse of office, the brazen refusal to acknowledge the impropriety of his financial arrangements with Mr. Denis O’Brien and Mr. Ben Dunne, and by his contemptuous disregard for his taxation obligations, Mr. Lowry displayed qualities similar in nature, and has cast a further shadow over this country’s public life”.

4. “Mr. Lowry and Mr. Denis O’Brien had at least two interactions in the course of the process. It is beyond doubt that, in the case of the latter interaction, Mr. Lowry imparted substantive information to Mr. O’Brien, of significant value and assistance to him in securing the licence”.

3. “The second, and profoundly reprehensible occasion, was on 17th September, 1995, when Mr. Lowry encountered Mr. O’Brien at Croke Park, at the latter’s design, subsequently met with him, by arrangement, and departed from the agreed venue to another location for a private conversation. The Tribunal is satisfied that, during that private meeting, Mr. Lowry shared with Mr. O’Brien the information earlier conveyed to him by the Chairman of the Project Group, that Esat Digifone was in pole position in the competition, but that the evaluators had reservations surrounding its financial capability, stemming from the financial vulnerability of Mr. O’Brien’s element of the consortium. The Tribunal is further satisfied that, on that occasion, Mr. O’Brien disclosed to Mr. Lowry the proposition that Mr. Dermot Desmond would join the Esat Digifone consortium, and would underwrite Mr. O’Brien’s finances, and that Mr. Lowry provided comfort to Mr. O’Brien that notification to the Chairman of the Project Group of such an arrangement, in breach of the rules of the competition, would not impact adversely on Esat Digifone’s prospects”.

2. “It has been suggested to the Tribunal in correspondence, in particular by Mr. Denis O’Brien, that the extensive delay in the conclusion of the Tribunal’s work has driven the Tribunal, in order to justify its duration, to frame its findings in sensationalist terms, and specifically in terms reflecting negatively on Mr. O’Brien. The extended length of the Tribunal’s sittings was due predominantly to the activities of Mr. O’Brien, Mr. Lowry and their associates, in concealing information from the Tribunal, and in instituting and supporting litigation directed to suspending the Tribunal’s inquiries, at a time when they knew that further information pertaining to the matters under inquiry was being withheld by them from the Tribunal. These delays, and the extent to which they were due to the activities described above, are matters which have reflected negatively in the Tribunal’s Report on Mr. Lowry and Mr. O’Brien, and their associates, and justifiably so”.

THE ARTIST FORMERLY KNOWN AS LOL!

1. “The evidence disclosed the making of a carefully planned and covert payment of £147,000.00 by Mr. O’Brien to Mr. Lowry, through the agency of Mr. Phelan, and the late Mr. Austin, that was hastily repaid out of fear of possible disclosures at the time of establishment of the McCracken Tribunal”.