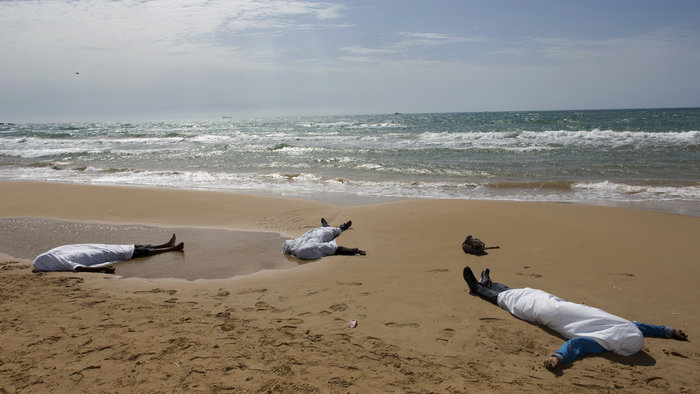 THE ANNIVERSARY of the historic D-Day landings has been marred by appalling and insulting reenactments carried out by dead refugees, claims a recent Daily Mail article.

The D-Day landings took place in France 72 years ago and saw thousands of brave men lose their lives in an attempt to liberate the people of France and the wider Europe, who were under the yolk of war mad fanatics hellbent of the total destruction of the civilised world.

“We were trying to celebrate how much of the world came together as a unifying force against oppression and violence, and to be honest that ill-advised reenactment puts a downer on things,” confirmed one Daily Mail reader on the newspaper’s website.

As the world acknowledged the sacrifice and bravery of so many with official commemorations, dead refugees in their thousands washed up on European beaches in what some have described as ‘insulting to the legacy of those who sought to help innocent people regain their freedom’. It is not believed they were part of an official ceremony.

“I appreciate that many of them travelled from Syria and further afield to honour the Allies, but none of them were wearing the usual reenactment gear,” explained one irate Daily Mail commentator.

“And their reenactments were historically inaccurate as many of the people involved were women and children,” the commenter added, “here I was trying to acknowledge a time when man’s inhumanity to man was at its most potent and these selfish people were trying to steal the limelight”.

Despite the lack of verifiable information and reporting within the media, it is believed refugees will continue to wash ashore.