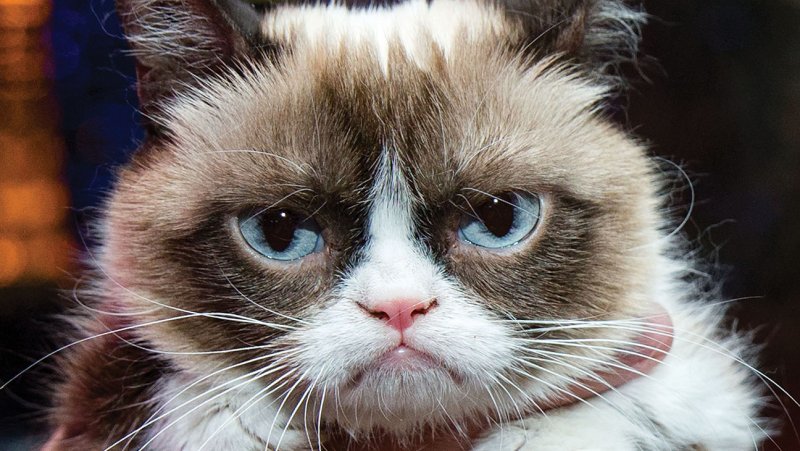 The 2-year-old animal celebrity was due to make an appearance on a local TV station earlier this morning, but failed to turn up with owner Tabatha Bundesen.

At around 2am, Ms. Bundesen made a dramatic 911 call from her hotel room, requesting the assistance of emergency services after finding her cat lying motionless in the bathtub.

A veterinary surgeon rushed to the scene, but later pronounced the Internet sensation dead after failing to resuscitate her.

Sources at the hotel said the cat had written a suicide note and was found lifeless beside “a large container of sleeping tablets”.

“The owner was inconsolable in the lobby shouting ‘why?’ over and over again,” said the source, who works as a night porter.

It is understood Ms. Bundesen left grumpy cat on her bed at approximately 10:30pm before going to sleep, but when she woke up to go to the toilet, she found the animal lying face down in the bath with a suicide note on the floor.

Grumpy Cat first rose to fame in 2012 when a picture of her went viral on internet site Reddit. In the proceeding years the cat enjoyed celebrity status, featuring in numerous TV shows and appeared in her very own movie called ‘Grumpy Cat’s Worst Christmas Ever’.

“She was never happy and battled with depression for quite some time,” explained the cat’s agent, Terry Masterson. “Everyone found her depression funny and I think that really got to her in the end. Depression isn’t funny at all.

“Hopefully she will find eternal peace with her passing,” he added.