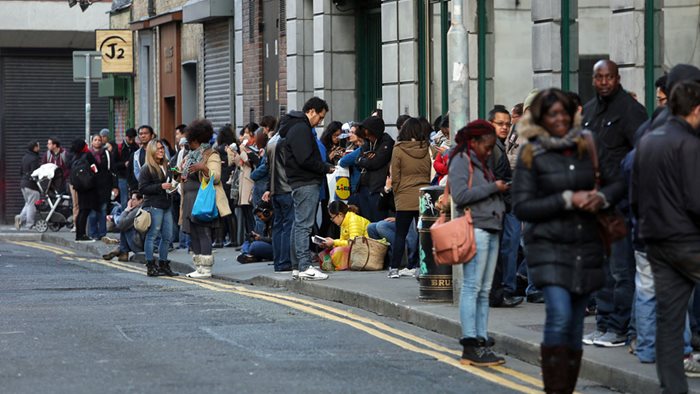 “It looks nice out, but it’s actually friggin’ Baltic,” giggled one immigration bureau official, peering out through the blinds at the queue of hundreds of people snaking down Burgh Quay.

“Some of these poor bastards have been standing out there since last night. They must be bursting for a piss at this stage”.

We’re spending the day in the offices of the Garda National Immigration Bureau in Dublin, which handles the distribution of work, study, and re-entry visas to all foreign nationals. Outside, a queue of hundreds wait patiently for the doors to open, so they can apply for their relevant permits. Many have been queuing since last night, but the civil servants in the GNIB don’t appear to be in any hurry to open the doors.

“Fuck ’em, let them wait another while,” said one application processor, on his third coffee of the morning.

“Every year we issue a statement talking about overhauling the system and shortening queues, but it’s all just lip service. We work with our schedule, not theirs. If they don’t like it, they know what they can do”.

Outside, tensions grow among the weary crowd, many of whom have travelled from across the country to receive essential documentation.

“It’s the one time of year I dread,” said one applicant, who has lived in Ireland for ten years.

“Having to get my visa renewed, it’s a three hour drive to get here, then queue all night, then hopefully be one of the lucky ones that gets a ticket to be processed by a GNIB service rep, and not have to come back the next day”.

“A visa costs €300 a year, so you’d think they’d want to run this service as efficiently as possible to make as much money as they could, maybe have online pre-registration or a more streamlined chain of processes but no… they just prefer to see us squirm”.

Back inside the warm GNIB offices, management begrudgingly admits that it’s time to open the doors and start processing people. Staff is heard to grumble, but lighten up when they hear that only half of the available counters are to be manned while the others stay closed, making the process as long and arduous for the applicants as possible.

“It’s the little things that make me love my job,” said one prick, before going on a coffee break just as the front doors open.