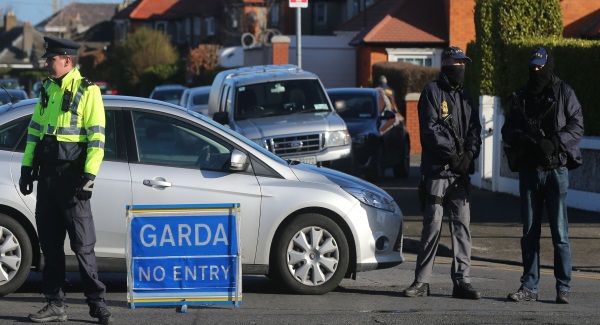 MEMBERS of An Garda Síochána were welcomed back this week after finally been taken off water meter duty in a bid to tackle actual crime.

Following their return, thousands of Gardaí were immediately deployed to Dublin city to help with ongoing searches relating to the Kinahan crime feud, which has resulted in several high profile gangland deaths over the past six months.

“We’ve had to ease our boy’s back into it slowly, as they’ve been away for a few years and are a bit rusty,” Garda Commissioner Nóirín O’Sullivan told WWN, explaining why Irish Water meter installers were present at many of the raids. “We’ve had to hire on a few water meter installers to help with the transition. They just kind of tag along with their red barriers for support and are handy when securing a premises that are being searched, due to a court order banning the general public from entering their barrier space”.

So far this week, dozens of search warrants were carried out by Gardaí investigating criminal activities in the city, which had a boom of its own during the recession, caused by depleted Garda numbers and a lack of financial resources.

“It’s great that we can still have the chat and cup of tea with the water meter lads,” one garda said. “Now we can start dealing with real criminals, instead of doing jobs for the ones running the country”.