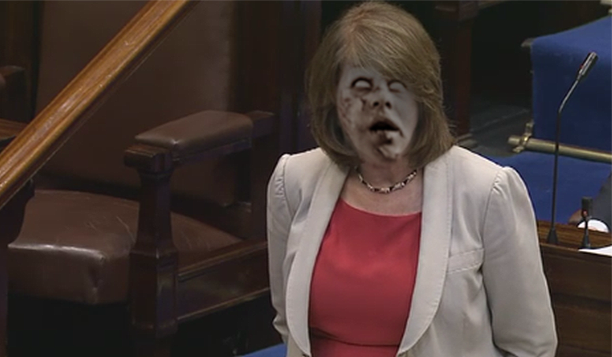 FORMER Tánaiste Joan Burton has been asked by the Ceann Comhairle to clarify what she meant when she told the TDs in the Dáil chamber that they should “join us or perish in a lake of fire and blood”, during bizarre scenes in which her eyes rolled back into her head revealing nothing but emptiness.

Labour TD Burton, ageless, had been spotted acting erratically earlier in the session, as TDs made their case for the formation of a new government ahead of what proved to be fruitless attempts to elect a new Taoiseach.

The Labour leader was said to have been “twitching and grimacing” while clutching a pencil in her right hand, with which she was using to scrape macabre sketches into a little A5 jotter that she wasn’t even looking at.

As the newly appointed Ceann Comharile Seán Ó Fearghaíl was addressing the chamber, Burton “rose to one foot” and pointed an upside-down hand at the assembled TDs, and chanted “join us” for five minutes before collapsing to the ceiling.

“This is just a pitiful attempt by a depleted Labour party to maintain a foothold in the new government,” said one political and paranormal expert we spoke to.

“Burton has clearly formed a coalition with some form of malevolent spirit or djinn, and is attempting to get as many independent TDs and maybe even the Social Democrats to join her. It didn’t work for Fianna Fáil in 2007, and it won’t work here”.