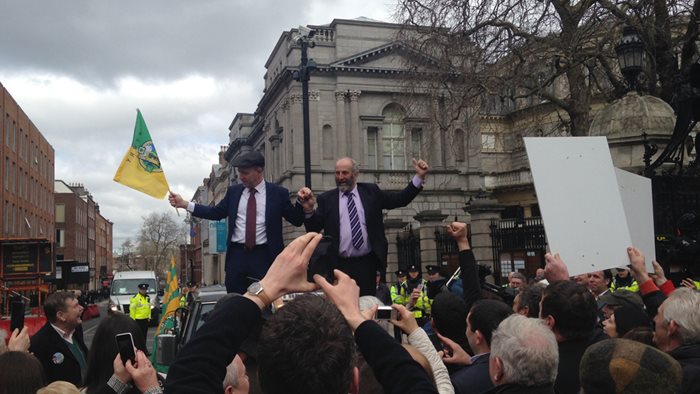 INDEPENDENT TDs Danny and Michael Healy-Rae have confirmed that they will appear live at this year’s electric Picnic festival, following a barnstorming performance outside Leinster House yesterday.

The Kerry pair had attended the first Dáil session after the general election with an intention to be seen as heavy hitters in the world of Irish politics, and they set about doing this with a trad session on the bonnet of a jeep.

The crowd-pleasing atmosphere was quickly noted by EP promoters, who booked them for a Saturday slot on the main stage at the Stradbally-based shindig.

The Healy-Raes will play a set comprised of accordion-based covers, with a leaked setlist suggesting that they may be about to put their own spin on classics such as “Rhythm Is A Dancer” by Snap and “You Spin Me Round” by Dead Or Alive.

“They could be the next Mumford & Sons,” said Cathal Brennan, booking agent for the boutique festival.

“They’re clearly very popular in Kerry, so we’d be happy if we shifted a few hundred tickets in the kingdom on the strength of that alone. The brothers didn’t want payment though, they just said that they might want a favour from us at some stage further down the line. Not that enamoured with that set-up, but it was all we could do to get them on the bill”.

Breaking: it has just been confirmed that the Healy-Raes have broken up, citing “creative differences”.