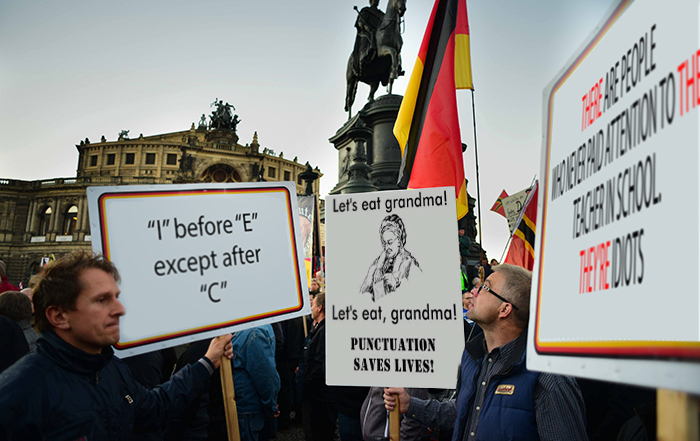 TENS of thousands of self-confessed grammar Nazis flocked to the German city of Berlin yesterday to march against the ongoing problem of poor use of grammar online, WWN can reveal.

An estimated 64,000 people marched through the capital city, vowing to correct the world’s spelling and grammatical errors regardless of whether anyone wanted them or not, claiming it is their God given right to do so.

“We’ve had enough of your mistakes,” parade organiser Jon You’reson explained, whilst marching with an ‘I before E, except after C’ placard. “If the world wants to progress, it needs to be able to spell and structure sentences correctly. We don’t ask for much, only that everyone adheres to the same grammatical laws laid out by their own language”.

Mr. You’reson went on to blame the recent rise of technology for the sudden lax attitude towards spelling and grammar, stating that if people didn’t act now, the world will end up using emoticons instead of words by 2050.

The parade, which began at 2pm yesterday afternoon, lasted for over three hours before being dispersed by German police after a rival group of dyslexic protesters clashed with the Grammar Nazi parade at 5pm.

“They arrived with misspelt slogans like ‘Don’t mind the grammar Nazi’s, Their wrong’, and ‘Yuor only jealus’,” said one eyewitness, who was watching from their apartment block. “Then one of the grammar Nazis tried to correct them and it all kicked off.”

Riot police were later called in to separate the groups, causing a barrage of mispronounced words to be exchanged between the two factions. Several people were reportedly seriously insulted during the incident.