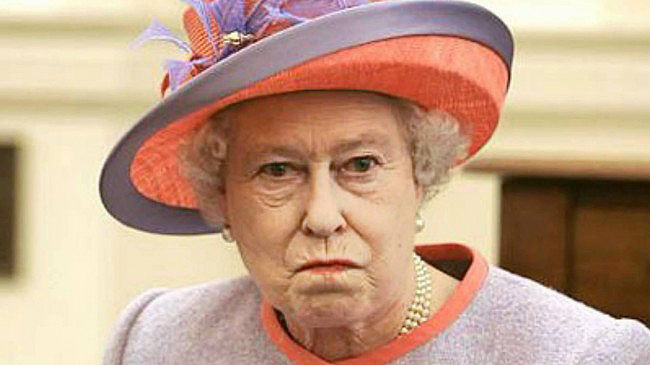 ONE gets it, it wasn’t the Empire’s finest 800 years, but honestly chill out WRITES Queen Elizabeth II

One is hesitant in even constructing this correspondence, such is the feverish nationalism the Irish find themselves afflicted with these days, however, one feels the hour may have arrived in which you could just get over the whole 800 years thing. It’s not like you had to live through it, Jesus Christ.

Honestly, one does get it, one can get excitable too – have you ever worn a crown? It’s exhilarating stuff. But, the more prickish amongst you need to calm yourselves, the Rising has you more riled than a 13-year-old in a YouTube video comment section.

Scarcely do travel problems announce themselves to the Royal family, yet one has been told by the Irish State that an April visit is out of the question. Banning the Queen of England from making a trip is troublesome. Mainly because, one is the fucking Queen, and one doesn’t like it.

One wouldn’t protest too vigorously only for the fact one had got a class deal on Lismore Castle on Air BnB, have you any idea how hard it is to find a cheap castle to rent when going abroad? Fucking hard, that’s how hard, and now one is expected to cancel my visit on the 24th of April because some of your troublemakers took a bullet or two after acting the bollocks for a week. One wasn’t even alive when this happened.

A quick glance at Wikipedia even suggests they weren’t all that great, and one of them was Scottish, that says all you need to know really.

In conclusion, one pleads on two fronts – one, one just wants a couple of days away from one’s horrid family, two, get the fuck over yourselves, you’d swear you were the only lot the Empire fucked over, have a look at poor Bengal during the World War II. One would speculate the Empire went soft on you.

P.s one is open to writing a nice article, in exchange for being allowed to stay in April, about how a Lady from another country visited Ireland and quite enjoyed it, you seem to love that stuff.