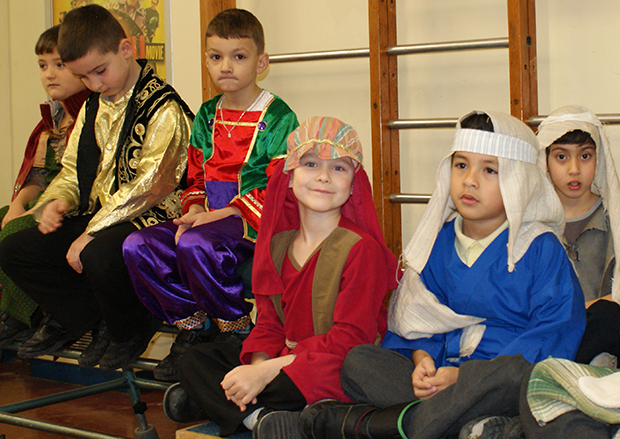 When we received an invitation to a nativity play at St. Bertie Ahern Primary school in Waterford city last Monday, everyone in WWN towers begged for the assignment as it was yet another chance to write about Christmas, and more importantly, a chance to get out of the office.

Pulling the short straw, I could hardly contain my excitement as my colleagues cursed my good luck. However, my celebrations were short lived the second upon arriving at the school.

Entering the school gate, I was greeted by principal Gerard Hanley, a thin man in a tweed jacket with leather elbow pads, who ushered me upstairs to a room packed with anxious parents and children, all waiting for the teacher’s cue to start.

“Okay everyone, this is Patrick Browne and he is a journalist for local newspaper Waterford Whispers News,” Mr. Hanley exclaimed. “Patrick will be writing a review of today’s performance so I want everyone to do their very best.”

“Be kind to them now,” he suggested, half laughing for some reason, “these kids have been rehearsing all week”.

I took Hanley’s comments on board, but as a veteran journalist of 27 years, I was here to do my job.

Following several half-hearted introductions to some teachers and parents, I sat myself at the front to get a good vantage point.

Introducing the play was 5-year-old Tommy Hutchinson, a brazen looking child with blonde hair. Tommy’s narration was excellent, but I couldn’t help feeling he was a little distracted by a ghastly middle-aged woman with an iPhone who kept waving at him – probably his mother. This inevitably ruined the child’s performance for me, but I blame the parent for that and not Tommy.

Tommy managed to set the tone for the play: some angel appeared to a woman called Mary telling her she was blocked up with God’s baby. Her husband seemed cool about it, but they had to head off on a broom together (which I was later told was a donkey) to a town called Bethlehem to fill out some paperwork. Basically, the story of Jesus’ birth. And when I say basically, I mean that these kids were basically terrible actors.

Several group songs interrupted the play all the way through, and to be honest, I don’t think it worked. The kids were out of tune and some didn’t even know the words. One kid didn’t sing at all. It was a disaster. What bugged me more was the fact this was advertised as a ‘play’, not a musical.

I found the lead actors dreadful. I know St. Bertie Ahern’s is an all boys school, but they could have borrowed a girl from neighbouring St. Twink’s to play Mary, because Timothy fucking Jones was absolutely brutal.

Not only did Timothy not even try to mimic a woman’s voice, he couldn’t fake labour pains if his life depended on it. Not even a look of shock when the angel Gabriel broke the good news. Nothing. He just stood there like a little dope with his freckly mouth open.

Mark Tracey portrayed Joseph very well. As in, he said nothing all the way through and looked largely vacant in the background. An easy role one might think, but very hard to pull off. So well done Mark.

Now, where do I start with the Innkeeper, the three wise men and the shepherds? It’s not good news I’m afraid. These children should all be told that under no circumstance should they step foot on a stage floor again… not even as a stage hand.

The Innkeeper messed up his lines, twice. One of the three wise men couldn’t even pronounce Frankincense, or ‘Fwankenstine’ as he said it, and the shepherds looked more like Saudi Arabian oil dealers than sheep minders. My advice to the teachers and parents would be to focus their children’s attention on more academic subjects that don’t require them to pretend they’re someone else.

After the play was over, many of the parents came up and asked me what I thought, so I told them the truth: ‘pure and utter shite’.

Unfortunately, this did not go down well. Several parents began cursing at me in front of their own children, calling me horrific names I cannot repeat here: wanker, evil bastard, horrible prick. I told them it wasn’t my fault that the casting was done so badly and their kids were pathetic actors. I suggested hiring real kid actors for next year’s show and to dump the musical numbers because they were so bad; something the class teacher didn’t like hearing of course, because she organised this whole fucking disaster.

I urged parents to attack her instead, but it fell on deaf ears and I had to leave quite quickly due to some angry Polish dad being held back by a group of teachers.

St. Bertie Ahern’s senior infants’ nativity play was shite at best. The whole thing was a shambles from start to finish. The costumes looked like they were pulled out of a charity shop skip. The audience were biased and there were too many people illegally filming the play on their phones. Like, enjoy the moment in real life people!

What annoyed me most was how petty the children were when I tried to give them valuable feedback after the show, and how sensitive everyone was to my valid points. But as the saying goes: If you can’t take the heat, get out of the kitchen.