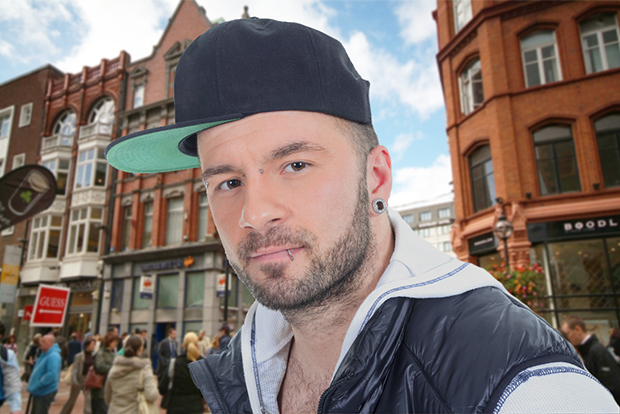 In its Opinions series, WWN gives a platform to normal everyday people who should be fucking thankful we did. Today, professional imaginator David Barber explains that Dublin would be great if they were no poor people it in.

By now you’ll have seen those ‘Dublin: A Breath Of Fresh Air’ posters that are put up in the city to lure more tourists here, but surely encouraging people to actually visit the city they are presumably already standing in is a bit silly. Would you not put them up in other places abroad? Well, anyway, those billboards are class, ‘cus typefaces and shit. But, do you know what aren’t class? Poor people.

Especially during Halloween. To give the poor their Latin, the Genes Poorus, is unable to contain its barbaric urges once it has had a bit of alcohol. I know very little about the violent incidences which occurred over the weekend, but it’s well known that people from working class areas are one homogenous group that can be shoehorned into a person’s unsubtle and disdainful diatribe for the working class, but I don’t even need to do it here because absolutely all of them were out on Halloween night stabbing the holes off each other.

This is the definition of un-sound behaviour.

Thankfully, none of the bonfires they started spread to any cafe with a pun heavy name which sells artisan baked goods.

We can’t sugar coat it any way we like anymore, but if you like sugar coating, check out donut mecca Augier Danger… it’s to die for. As I said we can’t sugar coat all we like, and I’ve even done it myself in the years gone by, I once found myself chatting to a scumbag and I found myself not judging him based on a wide range of prejudices.

But I won’t make that mistake again. Let’s face it, poor people can’t afford to spend €3.25 on a goat’s milk latte, let alone ten quid on a love-reared quinoa salad, so you have to ask; what’s the point of having them in our city?

And that’s it, it’s OUR city, it’s the people who open cafes, like cool stuff, start blogging, know how correctly utilise Instagram filters and imagine things out of thin air that make this city what it is, and not the vast majority of Dublin’s inner city residents who have to contend with just getting by, day to day.

The majority of us are on the same page – we want nice, hand-painted shop fronts and some new apps that help us ignore the obvious problems this country deals with on a daily basis, and poor people are making it impossible to turn Dublin into what it deserves to be – the Berlin of Leinster.

Literally thousands of thick-accented people wearing tracksuits who are on the dole attacking an ambulance, is not on. Those ambulance lads are saints. And it’s pointless looking at this issue with anything less then a sheltered and myopic view, the HSE’s budget will be running a deficit of €600 million by the end of the year and is under constant pressure to cut expenses but it takes a lot of effort to care about this on a constant basis. Like, the fucking effort of it.

I wish I could point to the youth unemployment rate in the country being at 20% and also say it probably has something to do with disaffected youth, but it’s not true, sadly poor people are destined to be this way, it’s basic biology.

The latest crime figures show there has been a fall in homicides, robberies, and public order offences, but as we all know this isn’t true because the lads with thick inner city accents put me off my burrito.

It’s no wonder all those class tech companies in the Docklands, with their billions in profits haven’t bothered coming up with a scheme to help the underprivileged in the area with a paid apprenticeship scheme that encourages them to escape the trappings of poverty. You couldn’t trust the little shits and sure that’s what JobBridge is for.

No amount of increased tax income derived from these epic companies paying their fair share would ever bring about things like increased Garda numbers, a better funded health service or a more equal society.

I’m reminded of a class quote I saw on Intsagram: “I do not see why man should not be just as cruel as nature.”

It’s clear the poor in Dublin are cruel, but now it’s time we forget our generous Ted-talk sharing selves and be cruel as well. There is only one solution, and that is the eradication of the poor.