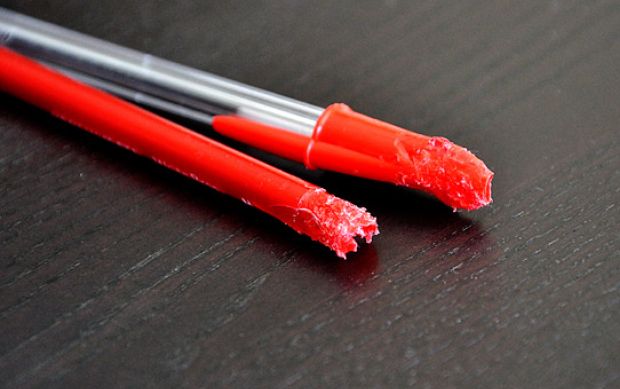 A NEW report from an EU commission has revealed that Irish people eat an average of 9 ball-point pens per year, 4 more than the European standard.

Statistics reveal that we gnaw, chew, bite and digest pens at a much higher rate than Swedish people, who came second in the study with a total of 5 pens per person consumed per annum. Lowest on the list were the Germans, who eat just half a pen each over the course of the year.

During classes, lectures, meetings and filling out slips in Paddy Power, the average Irish person consumes pens at a much higher speed than other nations.

While some of our EU neighbours simply tap the pen against their lip, Irish people get stuck in, eating first the lid, then the little coloured indicator thing at the top of the pen, before moving onto the hard plastic to reveal the chewy inner tube.

Considered by many to be a delicacy, this chewy middle can only be eaten at the same rate as the ink leaves it, leading many to throw the pen in the bin at this stage and start a fresh one. Very few people eat the ink or the nib, although it’s not unheard of.

“We’ve never seen anything like it. Although we do note that people who work in places where they get free pens tend to eat more than those who have to buy pens”.

In response, a new pen-patch is to hit the shelves next year, to help people wean themselves off their pen-eating habits, as well as an unchewable e-pen.