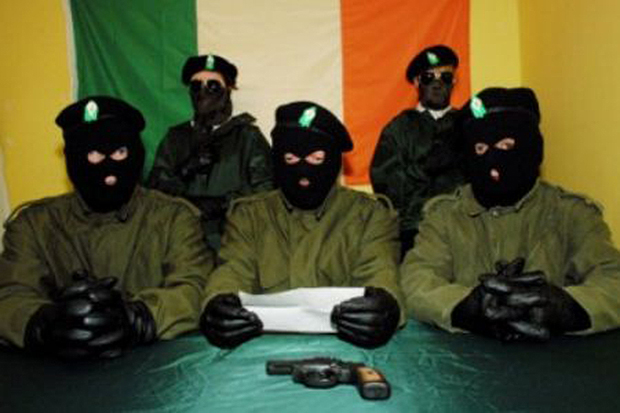 LEADING spokesmen for the Irish Republican Army have today formally denied that they still exist in a brief press conference at a secret location in Antrim.

Slamming a damning joint PSNI-MI5 report claiming that IRA members are still operating, a spokesman flanked by four masked members said the accusations were false and politically motivated and not to trust everything you see, hear or read.

“It’s all lies,” the uniformed IRA member explained. “There’s no paramilitaries here anymore. Everyone has moved on with their lives and have proper jobs, paying tax to the Queen and all hi!”

During the 8 minute address, the speaker picked up a handgun from the table and shot it in the air, sending plaster down on their heads, claiming it was the last bullet the group had left and not to worry anymore about violence, drug running, racketeering or fuel laundering.

“See, that here was our last lucky bullet which we kept off chance for the craic hi,” he added, now emptying the shell from the chamber and dusting off his shoulders. “Now we’re defenceless altogether, see? Those days are gone. No need to panic.

“This whole PSNI-MI5 report is a bunch of old wives tales to make children go asleep. If you could smell the mold from these uniforms you’d believe us. The stink off them. Haven’t been worn in years.”

The IRA’s confirmation that they don’t exist anymore appears to have temporarily defused a political crisis at Stormont, alleviating many fears DUP members had over the peace process.

“We’re glad the IRA finally came out of the woodwork to deny they still exist,” a DUP statement reads today. “Hopefully we can all go back to normal; until the next Irish general election, when they need us again to prove more links between Sinn Féin and the IRA.”