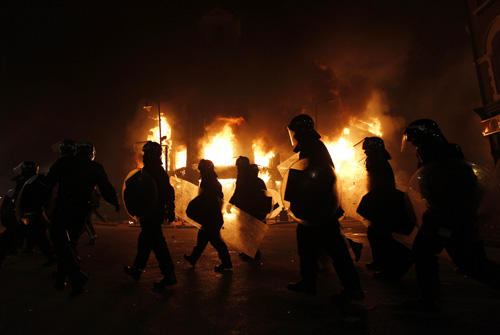 BELFAST is this morning counting the cost of last night’s vicious riot, after thousands of girls tore the town apart in anger following the cancellation of a sold-out concert by One Direction.

Kids as young as five took their frustrations out on homes and businesses, in what has been described as the worst violence ever seen in Belfast.

The riots kicked off after boyband One Direction cancelled their SSE Belfast Arena gig at the very last minute, citing that band member Liam Payne had fallen ill. Attendees initially thought the announcement was a joke, and the mood turned violent once the young girls realised that their idols would not be coming to the stage.

What followed was a night of clashes as riot cops attempted to subdue the thousands of angry children, as casualties were taken to hospitals across the North, some with injuries that were described as life-threatening.

“I was in a taxi that got turned over by 60 wee girls. The eldest was about 9,” said one victim, recuperating in the Royal Victoria hospital.

“They kept screaming and shrieking, I thought they were going to drag me out of the overturned car and necklace me, but the PSNI hit them with the water cannon before that could happen. There were headbands and bracelets flying everywhere”.

One Direction has issued an apology to the people of Belfast, while sneaking out via a specially built tunnel to avoid getting murdered by angry fans.