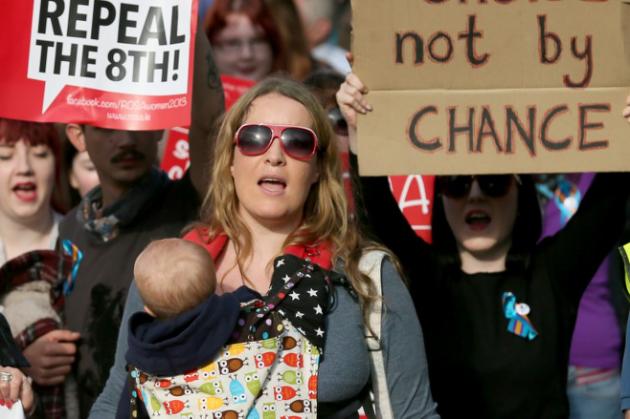 IN AN official statement regarding Saturday’s march for abortion reform, the Government has made it clear that they’ll only listen to the opinions of women who aren’t overly sensitive due to being on their periods.

Tens of thousands of people took to the streets on Saturday, marching from the Garden Of Remembrance to Merrion Square in protest of the 8th amendment of the constitution, which affords the life of an unborn child the same rights as its mother.

The controversial law denies Irish women the right to an abortion in instances of fatal foetal abnormalities, as well as in cases such as incest or rape. It can also see women imprisoned for up to 14 years if they self-administer abortion pills while on Irish soil.

In a bid to pressure the Government to stop using human rights as a political football and finally call for the decriminalisation of abortion in Ireland, thousands marched on the capital at the weekend, causing Leinster House to issue a statement asking for everyone to calm down until they were off the rag.

“We know you’re upset right now, but you always get upset round this time of the month,” said Michael O’Donoghue, the Government’s 65-year-old Sensitivity Towards Womenfolk expert.

“Go get yourselves a Galaxy Ripple and a hot water bottle and calm yourselves. Don’t be getting all vexed about laws and amendments and things that don’t concern you: stick on the telly and have a glass of wine and we’ll talk about it down the road when you’re not on the blob”.

O’Donoghue went on to state that the large number of men who marched on Saturday must have been experiencing “phantom periods”, probably due to being around so many menstruating women at the one time.