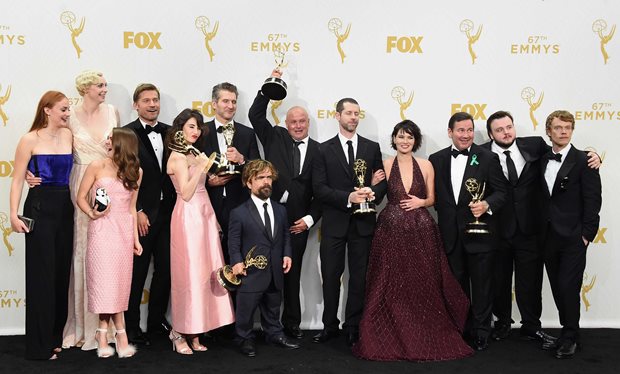 FANS of popular HBO fantasy series Game Of Thrones were this morning trying to get over last night’s shocking post-Emmy massacre, where virtually the entire cast and creative team were brutally murdered in cold blood.

Set in the fictional realm of Westeros, Game Of Thrones has enthralled viewers for years with its stunning, often bloody tale of warring families vying for the Iron Throne.

In recognition of the work done by the cast and creative team, the show swept the board at last night’s Emmy awards ceremony in Los Angeles, where it picked up gongs for outstanding drama series, outstanding writing, and outstanding visual effects, amongst others. In total, the series took 12 awards, breaking the record of most Emmys won by a single show in a year.

The celebrations were short-lived, however, as a mysterious group of black-clad strangers attacked the cast as they partied backstage, cutting them down in a vicious assault that onlookers called “needlessly violent”.

“One minute Peter Dinklage was standing with his Emmy and a big smile on his face, the next minute his head went sailing through the air,” said one eyewitness to what is now being referred to as the ‘Red Emmys’.

“Maisie Williams and Sophie Turner were stabbed through the heart, and the big lad who plays Sam got it in the neck. Even by Game of Thrones standards, it was fairly over the top”.

With so many members of the cast and crew slaughtered, fans are now fearing that next year’s season will focus mainly on Bran Stark as there’s basically nobody left at this stage.