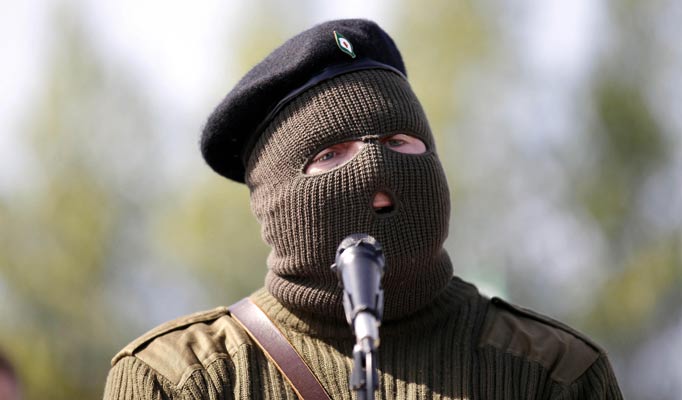 A LESSER known branch of the Irish Republican Army called ‘The Fake IRA’ (FIRA) has taken full responsibility for the murder of Kevin McGuigan in the Short Strand area of east Belfast on Wednesday, August 12th.

The group, who are not to be confused the Real IRA (RIRA), confirmed comments by Sinn Féin leader Gerry Adams yesterday that they “do not represent Republicanism” adding “they are not the IRA”.

“We’re just pretending,” a spokesperson for the organisation told WWN this morning. “No, seriously, Gerry is right; we’re not the same lads at’ll at’ll. They’re different to us in every way. Sure, we don’t even know Gerry that well. We just see him in passing, that kind of thing.”

Speaking in Dundalk at the National Hunger Strike commemoration, Mr. Adams said the IRA has “gone away” since 2005 to some far away land; never to return.

“Yeah, those boys are gone alright,” said the Irish politician, who continuously denies his senior connections to the group. “Not that I knew them in the first place or anything. I just know it wasn’t the lads… I mean: the IRA. Yeah, they’re probably somewhere really far away,” he added before dramatically ducking to the sound of a car door being slammed in the background.

“Okay, thanks for coming everybody. I better go home now to my very secure house. Bye,”  he hastily added.