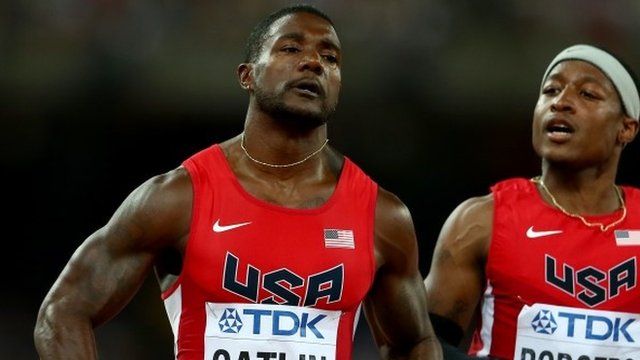 THE sporting world rejoiced at the sight of Olympic champion and world record holder Usain Bolt’s triumph in Beijing at this year’s World Athletics Championships, but scandal engulfed the sport once again as silver medallist Justin Gatlin tested positive for failure.

The American sprinter’s sample also tested positive for trace amounts of ‘bottling it’ after a final which saw him give in to the pressure and stumble as he dipped for the line some 10 metres before the finish.

Representatives of Gatlin’s also deny the presence of a jet pack strapped to his back, which appeared to be visible in some of the footage of yesterday’s 100 metre final.

Replays of the final appear to show a clear trail emanating from Gatlin’s backside, which experts have now concluded was the sprinter shitting himself as Bolt reached his peak speed of 29 miles per hour.

100 metre record holder Bolt won the race with a time of 9.79 seconds as he produced his best time this year in what is viewed as the most high profile race since the Jamacian’s gold medal run in London in 2012.

“The years of seeking an illegal edge against his competitors has seeped into his mentality, and the belief just ultimately wasn’t there, and that was reflected in his blood and urine samples post race,” revealed Athletics expert Denis Yardley.

Gatlin, who possesses all the talent and potential necessary to succeed in the competitive field of elite sprinting, is most famous for testing positive for banned substances twice in his career despite his silver medal placing.

His positive test for failure means that any satisfaction he will have gained from taking to the podium after his second place finish will remain tainted.

Jamaica’s success on the track in recent years puts the country in serious danger of being associated with something other than the music of Bob Marley and cannabis in the eyes of foreigners.