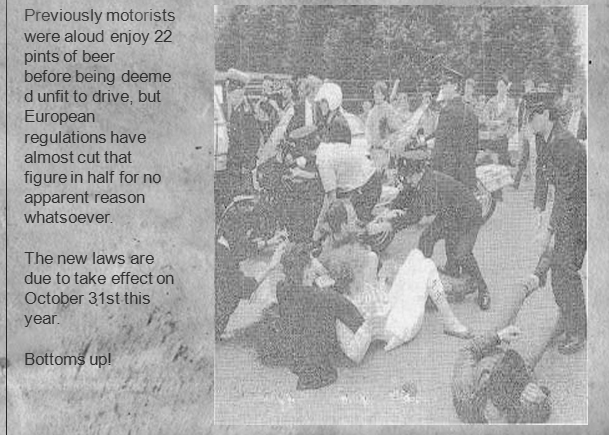 HUNDREDS of thousands of people descended onto the nation’s capital today in protest of the governments new crackdown on drinking and driving.

It has been reported that 345 people were injured in clashes with Gardai since last week, making this one of the longest and most violent protest in the history of the state.

Tensions rose when the minister for alcohol announced a 12 pint driving limit was to be put in place before Christmas, in a bid to reduce the number of deaths on Irish roads.

“What are we supposed to do, walk?” asked one protester. “Next they’ll be telling us not to smoke. We should have never joined the EU. The government sold us out!”

Previously motorists were aloud enjoy 22 pints of beer before being deemed unfit to drive, but European regulations have almost cut that figure in half for no apparent reason whatsoever.

The new laws are to take effect on October 31st this year. Bottoms up!