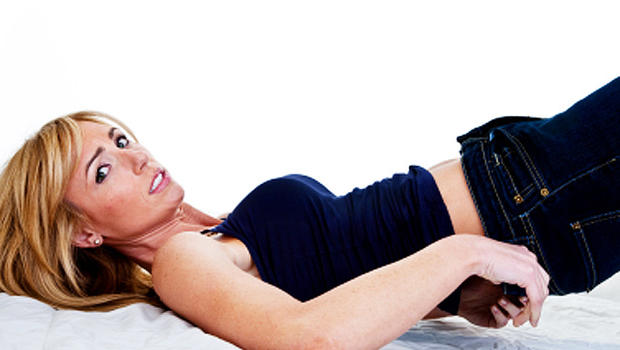 DESPITE the very real possibility of being incredibly late for drinks with friends, 25-year-old Hannah Slaney is to spend the next 30 minutes locked in a battle with her tight jeans.

Purchased last week from Topshop, the size 10 jeans are proving incompatible with Hannah’s size 10 body, forcing the student nurse to resort to ever more desperate ends in an effort to get them.

Despite her body being made up of flesh and bone like everyone else, the €58 pair of jeans seems reluctant to find its way passed Hannah’s upper thighs.

Growing increasingly frustrated after spending the last five minutes on her bedroom floor using the pull as hard as you can technique, Hannah has taken to googling several search terms which all hint at some grand international jeans conspiracy in which retailers conspire together to lie about the size of their jeans and turn them into implements of torture.

Hannah rallied again to place her crotch skywards with her elbows fixed to the floor, then pulling vigorously on her jeans but to no avail.

Was it not for the fact that Hannah had taken up weight training sessions in the gym several weeks ago, it is believed her arms would have lost all feeling at this point, such is the high demand on her biceps as she stubbornly attempts to drag her jeans up towards her hips.

Some 27 minutes after first beginning her fight Hannah was found on the floors sobbing by her housemate Ainé, who kindly attempted to help her into her jeans.

Ainé pulled on the jeans, but this only resulted in dragging Hannah further along the bedroom floor, causing 2nd degree carpet burns to Hannah’s elbows.

Experts in the field of jeaneology has confirmed Hannah will be very late for drinks with her friends.