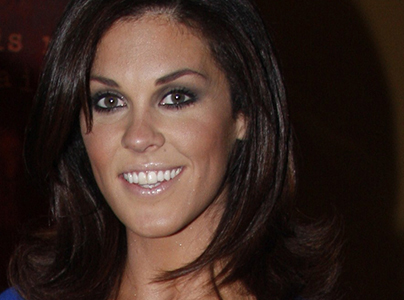 RECOVERING addict Glenda Gilson talks to WWN about her ongoing battle with sniffing firelighters and how it nearly destroyed her career in television for good.

Speaking from her home in South Dublin, the brave 33-year-old opened up about her problem almost immediately upon my arrival, frantically making sure I had no firelighters in my carry bag.

“Nothing in here only my laptop and notes,” I told her, before doing that fake kiss on both cheeks thing all these TV people love doing. “Your agent made sure to remind me at half three this morning”.

The presenter/model apologised for the early call, stating that even the hint of firelighter could set her off.

“I used to sniff four packets dry in one sitting,” she explained. “They would just vaporize in my hands – like magic fairy dust”.

Gilson, married name MacNaughton, sat me down in her luxury sitting room in front of a fireplace, where a TV screen now hangs.

“Are you cold?” she asked, picking up the television remote and pressing a button which made a roaring fire appear on screen.”We’ve had to block up all the fireplaces and replace them with this. It gives the feeling of warmth, do you like it?”

“Yes, it’s kind of fools you, doesn’t it?” I responded nervously.

“It doesn’t smell like a fire though. That’s the only thing,” she replied.

With that, she began telling me about her journey, and how at the age of four began sniffing Zip firelighters out of boredom.

“I just liked the smell of them – a lot,” she said. “That petroleum-esque aroma comforted me and I soon became hooked”.

Glenda explained that she successfully hid her problem all through her teens.

“Other girls in school would smoke. I would sniff firelighters. Luckily, I didn’t get hooked on both, or I wouldn’t be here to tell the tale”.

In 1998, a school friend of Glenda’s died in a horrific accident caused by such an addiction.

“I kept telling her that it was dangerous to mix the two, but she wouldn’t listen,” she added, now visibly upset. “Then, one day before the mock exams, Helen just went up in a puff of flames up the back lane. Firefighters found a bundle of Tesco firelighters beside her. Tesco! I was morto for her”.

Moving onto her television career, the mother of none said fellow Xpose presenters actually staged an intervention in TV3 studios.

“Karen (Koster) approached me in the green room with that other one I can never remember the name of,” she recalled. “She said that she was sick of me smelling like firelighters everyday I came into work and wanted to help me. I just broke down crying in her arms.”

“That was the beginning of the end for me.”

On July 12th, 2013, Glenda Gilson admitted herself into a rehab clinic for firelighter addiction in Athlone, one of the only treatment centres in the country.

“They were great in there. So patient and professional. I don’t think I would be here today if it wasn’t for them,” she said.

A year clean, the brunette beauty went on to get married to husband and businessman Rob MacNaughton at St Senan’s Church in Kilrush Co. Clare and is now trying to build a firelighter free family.

“No, I didn’t,” she replied viciously. “Why would you say that?”

I decided to not pursue what I heard and thanked her for her time.

“No, really, I didn’t say lighters that time,” she said again nervously.

“It was probably a Zip of the tongue,” I replied.

She looked confused and led me to the door, half wondering and too afraid to ask me to repeat myself.

An estimated 45,897 people in Ireland are being treated for firelighter sniffing addiction every year. With little or no government support it is hard for centres, like the one in Athlone to give support. So please, do what you can to help, by texting ZIPMEUP to 56789. Your donation will go a long way.