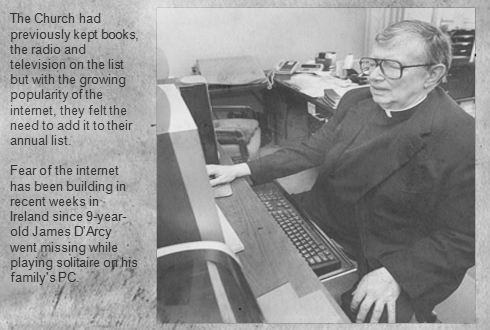 THE Church has issued its yearly list of things they believe to be the work of Satan and there are a number of surprises.

“While our technological experts here at the Vatican have not yet tried to gain access to the internet for fear it will swallow their souls, Catholics can be rest assured we know for a fact that is the work of Satan,” explained Cardinal John de Caro spokesperson for Pope John Paul II.

“The weird crackling and buzzing noise it makes when it is apparently ‘connecting’ is clearly an incantation designed to bring about the Devil’s presence here on earth,” the Cardinal added.

The Church had previously kept books, the radio and television on the list, but with the growing popularity of the internet evident, they felt the need to add it to their annual list.

Fear of the internet has been building in recent weeks in Ireland since 9-year-old James D’Arcy went missing while playing solitaire on his family’s PC.