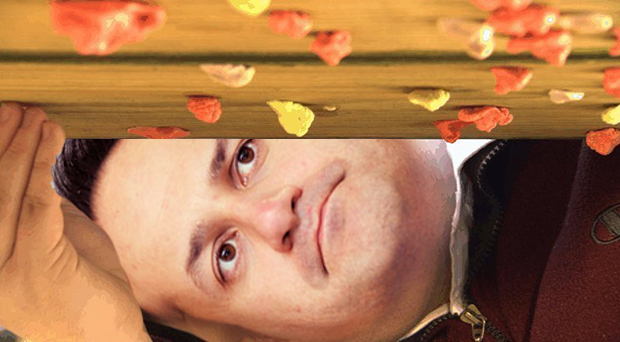 MINISTER for Health Leo Varadkar is today beginning the task of picking hardened chewing gum from underneath the benches in Dáil Eireann, following an order to do so from Taoiseach Enda Kenny.

The grim task, which Mr. Kenny claims is “Leo’s turn to do”, is expected to take until Monday and ruin any plans the young TD had for the weekend.

Varadkar, who was once one of the country’s most popular up-and-coming politicians, has seen his stock fall since being handed the dreaded health portfolio in a recent cabinet reshuffle.

Furthermore, the Dublin West TD recently irked the Taoiseach with claims that health tactics proposed by outgoing minister James Reilly were impossible to achieve due to budget constraints. Although annoyed that one of his ministers was failing to toe the party line, Mr. Kenny was quick to point out that the job of cleaning chewing gum from under the benches was by no means a punishment for speaking out.

“We all have to do it from time to time. It’s just Leo’s turn now,” said the Taoiseach, speaking at a press conference earlier today.

“Ministers are dreadful for sticking chewing gum under their seats when the Ceann Comhairle comes in, so a huge amount of it builds up over the term. If Leo rolls his sleeves up, it won’t take him long to do… He might even be finished by Sunday evening”.

“I want to make it clear that I feel in no way threatened by the popularity of Minister Varadkar, and although I was annoyed earlier this week when he spoke openly about policies that were unworkable, I would never give someone a shitty job to do out of spite”.

Having already begun the task of hacking away a lumps of Hubba Bubba underneath the 166 seats in the Dáil chamber, Minister Varadkar was unavailable for comment.

However, sources close to the TD said he is “fairly pissed off” at having to miss the last of the good weather before the Dáil recommences, and despite what he see’s as a punishment for speaking the truth, he still intends to strive towards fixing the health care system which has been “run into the fucking ground”.