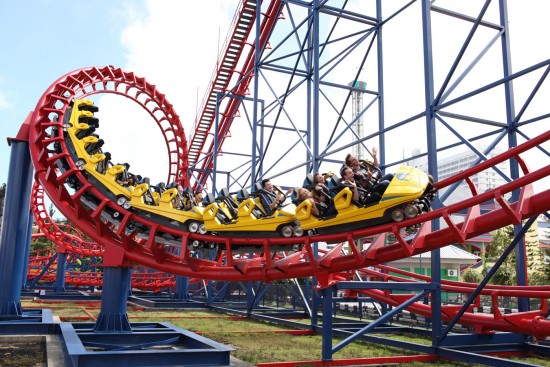 AS THE 100 year anniversary of the 1916 Rising approaches, entrepreneurs across the country are looking for ways to cash in on this once-in-a-lifetime opportunity. With official government plans for the centenary still under wraps, WWN investigated 1916 Land: a multi-million euro adventure park currently being developed in Dublin.

Located in the now-derelict Boland’s Mills, itself the scene for some of the Rising’s fiercest fighting, 1916 Land will be a one-of-a-kind attraction for all the family, with rides and games suitable for all ages based on the bloody birth of our nation when rebels seized key locations around the city on Easter Monday and declared Ireland to be a Republic. The brainchild of London-based businessman Ivor Sterling, 1916 Land begins construction next week to be ready for it’s October 2015 opening date.

“A centenary of any sort is an utter goldmine,” said Sterling, during a sod-turning ceremony at the Boland’s Mill site.

“My company were on the lookout for any upcoming 100-year events, so we were delighted to find one right on our door. We picked up this property for a song and got to work with some of the best theme park designers in Europe to start development”.

“The Irish government are pretty eager to get any kind of foreign investment into the country and are really looking to sell this 1916 anniversary to tourists across the world, so they were more than helpful in supplying us with permits and gave us free reign to do whatever the hell we liked”.

Although details were scarce as to what attractions would feature in 1916 land, WWN were able to catch glimpses of plans for a 4D Simulator ride which places people in the shoes of the Sherwood Forresters as they were pinned down and massacred on Mount Street, as well “The O’Rahilly Run”, a mocked up section of Moore Street where people of all ages can attempt the ill-fated dash of Michael “The O’Rahilly” O’Rahilly as family members fire paintballs at them from the end of the lane.

Unfinished animatronics versions of Padraig Pearse reading the proclamation were on show, as well as an authentic replica of a refitted and fully armoured Guinness truck which will whisk visitors around key points in Dublin as they yell at passers-by to stay off the road or be shot.

Speaking at the event, Minister For 1916 Affairs Brian Hayes addressed concerns that 1916 Land may be disrespectful to the memories of those who fought and died on Easter Week, as well as accusations that the forthcoming centenary would be used by the Government as a cash cow.

“It’s not every year you have a 100 year celebration of something,” said Minister Hayes, sipping tea in what will soon become the Countess Markievicz Cozy Kitchen.

“So we’re trying to make sure that during 2016, we have an appropriate celebration of one of this country’s bloodiest conflicts. 1916 Land will be informative and fun for all the family, and will be a place where visitors to our country can buy authentic 1916 merchandise. A more tasteful, solemn memorial to the rising was on the cards, but in the end 1916 Land just offered a better return for the investment we’re going to put in”.

1916 Land is scheduled to open next year, and is currently recruiting.