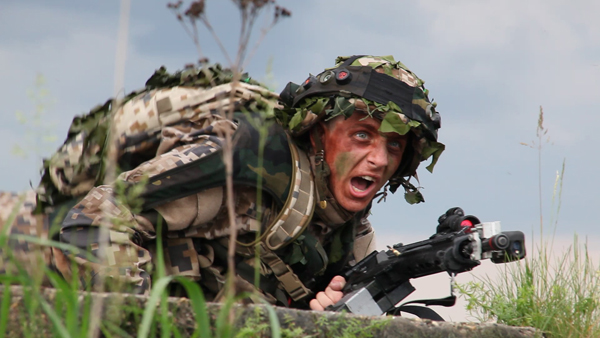 THIS is the heartwarming moment US Marine Todd Masterson was reunited with his old Iraqi warzone, just five years after being withdrawn from the country in May 2009.

Lieutenant Masterson said that the people in this particular province meant everything to him when he served there, and that returning had made him somewhat emotional.

“Just over there me and Delta company slaughtered three rebels cunningly disguised as 9-year-old girls,” he recalled while making the last checks on his equipment. “It’s been five years now and everything is pretty much how we left it – in democratically free ruins.”

The 27-year-old is one of a small party of US troops flown onto Mount Sinjar in northern Iraq, to assess the situation of thousands of civilian refugees besieged by Islamist militants from ISIS. The emotional reunion follows an attempt by the US to deliver military aid to Iraq.

“It’s time to bring back some mother fucking freedom to this beyatch…HOO HAWWW!” shouted the Marine as he ran towards a nearby mountain village with a rocket launcher on his back and firing several rounds into the air.

The UN said yesterday that 20,000 to 30,000 people were still stranded on Mount Sinjar and faced “potential genocide within days or hours”.

It continues to be a testing time for the Obama administration as they weigh up arming Kurdish Iraqi’s who were previously targeted by Saddam Hussein when he was armed by President Ronald Regan in the 1980s. Kurdish forces could be armed to take on ISIS who were previously supported by America in their attempted ousting of Syrian leader Bashar Al Assad.

Pursuing such policies are thought to have no resemblance to those pursued by President Jimmy Carter which saw the Afghan Mujahideen, of which Osama Bin Laden was a member, armed against Russian forces.