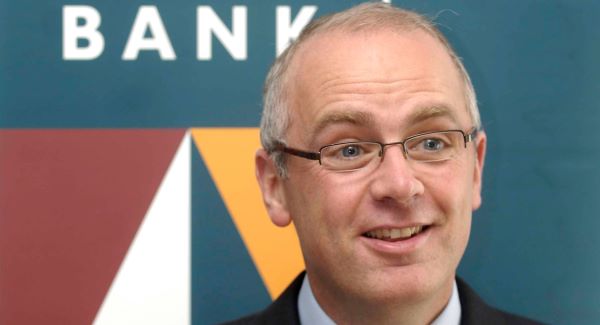 Following the success of last year’s seminal album “Anglo Tapes”, which went multi-pyrite in several countries, many doubted that David Drumm would have it in him to release a recording filled with quite as much hubris and disregard for banking regulations and general morality. Fans who feared the former CEO of Anglo Irish Bank would suffer from the dreaded ‘difficult second album’ can rest assured; WWN have heard the new Anglo Tapes, and Drumm is as hateful as ever.

The new recordings, released today by The Irish Independent, contain more of the morally deplorable insider trading which rang so true in the first Anglo Tapes album. Drumm’s unmistakable weaselly vocals carry the same amount of derision and sliminess as he thumbs his nose at both the government and his own board of directors, in a series of tracks which rival even the impact of “Uber Alles” from the first Anglo Tapes.

The standout track, “Ladybird Version”, features lyrics in which Drumm speaks of being as dishonest as he can while addressing the board about the catastrophic state of Anglo Irish bank in the months leading up to the fateful Bank Guarantee which crippled the country and sentenced every Irish citizen to a generation of austerity. Tracks such as “Morality”, in which Mr. Drumm is heard talking to a senior bank executive about how he doesn’t give a fuck about morality, help cement Drumm’s reputation as one of the biggest scumbags currently working in secret recorded phone calls today.

On the sure-to-be-a-single “Cushioning”, he refers to doing a ‘semi-little trade’ to ‘take some of the pain’ out of the bank’s zombie state; a reference to the buying of 500 million euro worth of bonds for 300 million, in order to have a balance sheet that looked like 200 million euro of profit.

It’s lyrics like these that really puts Drumm head and shoulders above every other toerag who sold this country out for their own gain, and this reviewer is looking forward to hearing more from this artist when he is finally hauled up on fraud charges.