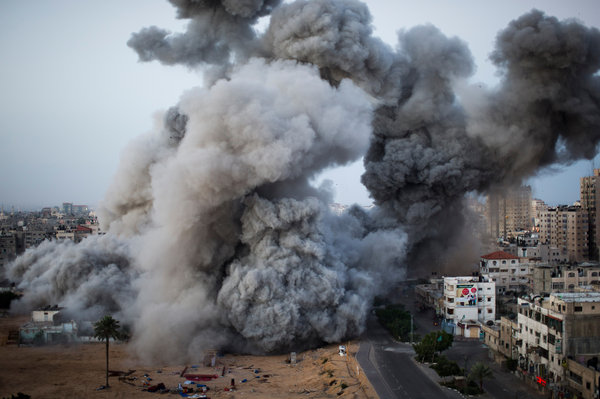 Tensions continue to rise in the small rural community of Arraghair today, as a longstanding aggression between two neighbours threatens to boil over. The vicious feud between the impoverished O’Briens and the affluent Reilly family, which spans several generations, showed no signs of abating despite calls from neighbouring families for a peaceful solution.

This week’s flare-up, the worst in several years, comes following accusations by the Reillys that rubbish from the O’Brien garden had been thrown over the wall into their garden. In retaliation to this, the Reillys have spent the past week constantly bombarding the O’Briens with nightly dumps of rubbish, reducing their garden to ruins. Despite calls for peaceful mediation, the Reillys have yet to cease the assault, which is said to have completely destroyed the O’Brien’s small vegetable plot as well as their greenhouse.

“Every morning when I go out the back, more and more of my land is buried under rubbish” said O’Brien patriarch Patsy O’Brien.

“We can’t live like this anymore. They say we started it by throwing rubbish over their wall; look, I have several young sons, and they can get quite angry with the Reillys. Maybe they would throw something over the wall, but nothing like what happens to us. If my sons need to be disciplined, they will be disciplined… but to utterly destroy the little garden we have is completely unwarranted”.

“Furthermore, I know it is more rubbish than their household produces; they are receiving rubbish from other families to throw at us. To me, those families are just as guilty; they know what the Reillys are dumping on our land, and yet continue to supply it to them”.

The bitter feud between the two families dates back to the mid-fifties, when the Reillys inherited a patch of land which the O’Briens had farmed for generations. Erecting a huge wall to cut off their new neighbours, the Reillys have encroached on more and more of the O’Brien’s turf as each year passed.

Attempts by the O’Briens to mediate with Reillys over the disputed territory have fallen through again and again, and periods of violence and unrest are frequent and often bloody. Neighbours in the surrounding area as well as the town council have appealed for the two families to cease their aggressions towards each other, but the Chief Councillor has yet to intervene for fear of running foul of the powerful Reilly family.

“We inherited this land, so it is ours,” said Ian Reilly, CEO of The Reilly Group, one of the area’s biggest employers.

“It’s that simple. If the O’Briens throw something into our garden, then we have the right to retaliate. We have given them fair warning to keep control on their sons, and they have failed to do so. So we will continue to empty our bins across the wall into their garden until they get the message”.

When asked if he felt his actions were designed to force the O’Briens into moving away altogether, Reilly was quick to answer.

“We have inherited this land, and if you look at the old maps in the planning office, this land originally spanned over onto their side too. So as far as we’re concerned their land is ours too. They are welcome to stay on it, but we will continue to make their lives hell while they do”.