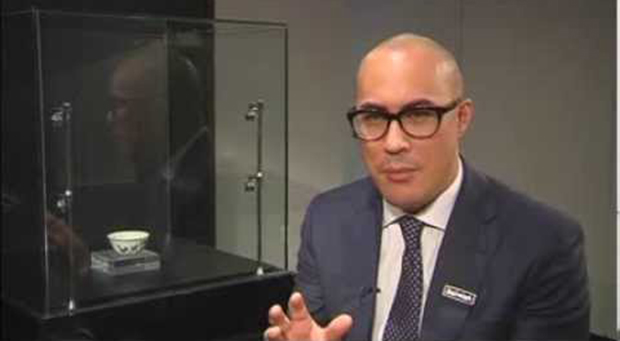 AN infamous cup used in the pornographic film ‘2 Girls 1 Cup’ film has sold at auction today for a staggering £6.7 Million in London.

The 2007 piece, which hasn’t been washed since its movie debut, went under the hammer at Christie’s earlier this morning and was sold to a successful bidder – believed to be a Japanese businessman.

The porcelain piece, still stained with human feces, was first bought in 2009 by English collector David Kent for just $200,000, and was later nominated for the Turner Prize that year.

“It has basically been sitting in a glass case on my mantlepiece since I bought it.” said Kent. “There were too many flies coming into the house and my wife hated the thing, so I just had to get rid of it.”

Both women, who appeared in the fetish film, were at Christie’s in London to watch the auction, with the films director Marco Antônio Fiorito.

“We’re just happy to see this little bit of history sold on again for such an amazing price.” said Karla, who claims to have originally thought up the idea of using the cup to hold her own excrement. “It was just one of those things where you don’t know if something will work or not. I’m glad now we went through with it. It will be something to show the grandkids when I get older.”

A source in the famous auction house hinted that the piece could sellon again for twice today’s price, due to it’s cult-like status.

“It’s a niche piece,” said Francis Outred, head of contemporary art. “I don’t think we’ve seen the last of this cup. Hopefully Marco will make a sequel down the line. He’s so talented.”