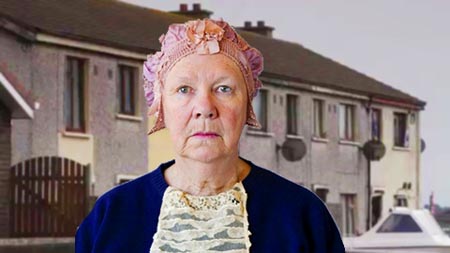 A COUNTY Waterford mother said today that she ‘always knew’ there was something a little bit creepy about Rolph Harris anyway, after she heard news of him being convicted of 12 child sex offences today.

Catherine Hanley of Larchville in the city, claimed she held back on her opinions about the Australian entertainer, for fear she would be unfairly judged by other people.

“I fucking knew he was a kiddy fiddler from the start!” said the 63-year-old. “I could tell straight away from those beady little eyes…... they‘re too close together or something.”

Harris has been convicted with nine counts of indecent assault and four counts of making indecent images of a child earlier today by the Crown Prosecution Service.

The offences that include:

Mrs. Hanley stated she was very surprised not to see  two little boys in the charge sheet.

“All his songs were about messing with children or animals sure.” she explained. “I remember hearing ‘tie me kangaroo down sport’ for the first time and thinking ‘that man’s a fucking pervert’ God love him.”

“Never trust a musician who’s favourite instrument is the didgeridoo!” she added.

The singer is one of a number of celebrities to have been arrested as part of Operation Yewtree this year in the UK.