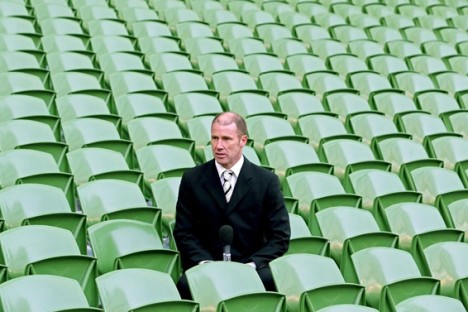 WWN has all the latest from the recent action at the World Cup in Brazil.

Brazil have taken out a full page ad in a variety of publications today looking for a centre forward to play in their quarter final match against Colombia. Applicants have been told ‘do not be Fred’.

Chilean player Mauricio Panilla got over his country’s defeat to Brazil by getting a tattoo of his last minute chance in the match which saw his shot strike the crossbar. Pinalla follows a long line of footballers who have chosen to immortalise moments in their careers by getting a tattoo. Ex-Man Utd and England player Rio Ferdinand has a tattoo of him fleeing doping testers reproduced on his back while Arjen Robben has a large scale tattoo of a number of his most treasured dives.

Yesterday saw France defeat Nigeria 2-0 prompting French fans at home to congratulate and praise every member of the squad except for Olivier Giroud, who was by all accounts, rubbish.

RTÉ have called a crisis meeting between Richie Sadlier and Kenny Cunningham following their continuing disagreements live on air. WWN has obtained the minutes of the meeting in which RTÉ suggested the men wear their shirts with as many as 3 buttons undone and to mention the ‘lovely women at home’ as many times as possible while staring directly down the camera lens.

Cunningham was later told to go find another table in the RTÉ canteen by Dunphy, Giles and Brady, despite a free seat being clearly visible on their table.

Luis Suarez issued an apology yesterday for his bite of Giorgio Chiellini several days after denying the incident took place. Despite cynical suggestions by some that Barcelona forced the striker to issue an apology, WWN can reveal it was infact a number of his sponsors, including Adidas, who literally held a gun to his head.

WWN cannot confirm reports that Sepp Blatter bribed the entire Cameroon team to throw their match against Croatia earlier in the tournament.

Germany emerged victorious against an entertaining Algerian side, but much of the match was ruined by non-football fans inquiring about Germany manager Joachim Loew’s sexuality. The explanation given by seasoned fans was that he is simply ‘German’.

Today sees the final two matches in the round of 16 take place. Argentina hope Lionel Messi finally starts playing well after a disappointing 3 man of the match awards and 4 goals so far in the tournament.

The USA take on Belgium in the evening kick off, prompting a number of your annoying friends to break into loud and obnoxious chants of ‘USA USA USA’.