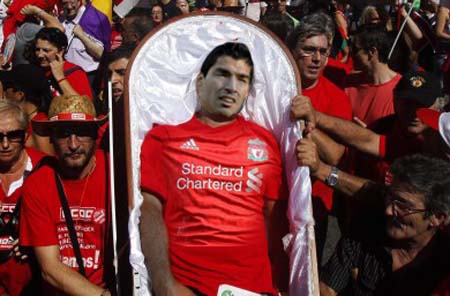 THE OWNERS of a 27-year-old footballer named Luis Suarez have confirmed the Uruguayan was humanely put down this evening by a local vet following a third attack on a human being earlier this evening.

A spokesman for the Uruguayan football team told WWN that the decision was made shortly after tonight’s incident, and sent its condolences to the players’ family in South America.

“It is with our deepest regret that we announce that a lethal injection containing 400mg of pentobarbital was administered to Luis Suarez at 17:34 local time.” said the spokesman. “Mr. Suarez’ passing was said to be quick and painless and we send our condolences, and his remains, to his family in Salto, Uruguay.”

Before his death, Suarez apologised for his “inexcusable behaviour” . However, this was the third strike for the star and an order was sent by FIFA to have the footballer put down.

Uruguay manager Óscar Tabárez said: “He was warned in the past about his behaviour and has no one to blame only his euthanised self.”

A funeral mass will be held for Suarez at his home town of Salto at 7pm tomorrow night.