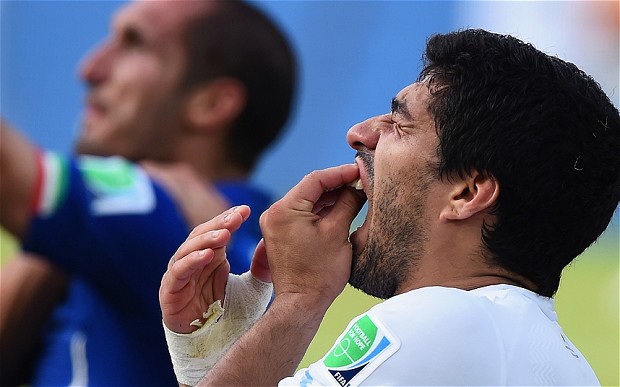 WWN reports on all the latest action from the World Cup in Brazil.

We will of course cover in detail what everyone in the football world is still talking about this morning: what the devil is going on with Gervinho’s hair?

The England team have personally written to Luis Suarez expressing their gratitude for deflecting all the attention away from their failure to progress to the knockout stages of this year’s competition.

The football world is abuzz with talk of the Liverpool and Uruguayan forward sinking his teeth into some meaty Italian, prompting ridicule, mob rule and puns aplenty. The normally ludicrous English tabloid press have resisted sensationalising the Suarez incident as only 47 publications have given instructions of how to kill him.

Liverpool have been quick to issue a statement which sees them openly admonish their star striker for the first time. “Today we begin construction on the Luis Suarez stand at Anfield. This will be built alongside a new statue of King Luis in an effort to show him how displeased we are. In fact, so incensed are we with his conduct we have offered him a new 7-year contract worth £200,000 a week,” read a section of the statement.

Colombia easily dispatched Japan last night with a 4-1 win, but thoughts have turned to how the national side can be protected from rabid cannibals in their next game against Uruguay. “Adidas have assured us they will work round the clock to produce a ‘bite proof’ shirt. It is essential in the modern game. It will give us the age and also help our players play without the fear of being eaten alive,” shared manager José Pékerman.

Football fans have expressed their surprise at discovering Greece have progressed to the next round of the tournament despite little evidence they played anything resembling football in the past two weeks.

FIFA have made a public appeal looking for any explanation whatsoever for the existence of Gervihno’s hairstyle.

Today sees Lionel Messi not ‘doing it’ in an Argentinian shirt once again as he most likely wins his side’s game against Nigeria single handedly.

Switzerland have convered their entire body in shinguards in anticipation of their UFC fight with the hacking Honduras side later this evening.

Fans of dramatic implosions continue to express their disappointment with the French team for keeping it together.