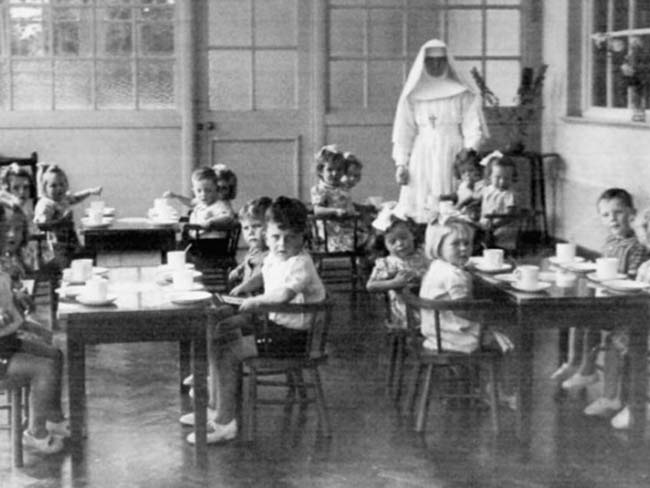 THE Catholic Church has responded to the grim discovery of the remains of up to 800 unidentified children buried in an unmarked plot beside a notorious “Mother and Baby Home” in Galway, claiming that the mass grave was a temporary solution and the infants remains are “just resting” there.

The Tuam workhouse for unmarried mothers and their babies was run by the Sisters of Bon Secours (French for “safe harbour”) between the years 1925 and 1961, during which time the bodies of at least 796 children aged from 2 days to 9 years were placed one by one in an unused septic tank, following deaths from TB, malnourishment, pneumonia, and good old-fashioned neglect.

Meanwhile the entire nation has reacted with shock and an unquantifiable disgust at the discovery made by Catherine Corless, a local historian and private citizen, as she carried out research about a church run institution known locally as ‘The Home’. The events that transpired there are a lesson in abject misery and unending sorrow that would even make a Nazi war criminal blush and this was reflected in the word on the street from many Irish people.

“Well, I’m 55 so a bit before my time, but when we used to visit my aunt up in Donegal, she would tell us to stay away from the fields down the road because there were babies buried there, but if only someone knew about it,” John Drummond, a Dublin native explained, “It’s all changed now though in fairness,” John said of a country that saw 196 children in state care die between the years 2000 and 2010.

“I can’t believe it. What vile creatures must have worked there?” shared a visibly upset Ciaran Giles, from Tipperary,”like there was a Magdalene laundry down the road from my house or so my father tells me, but like no one knew, well they knew but they didn’t, you know?”

Others on the streets tried to find some solace at the discovery of the mass grave. “Well, obviously those in the laundries have been compensated, Ireland’s moved on,” shared student Lauren Greene of a country that has yet to pay compensation in full to Magdalene laundry survivors.

“It was a different time, so arguments and the like create a false dichotomy,” shared 24-year-old Sean Cullen, who was told as a child to avoid walking home by the priest’s house for some reason, “ha yeah, that’s weird isn’t it? Because obviously my parents didn’t know the priest raped children or else they would have done something about it,” he added.

The Catholic church, who were limited to just €128 million in compensation to sexual abuse victims in a 2002 deal, meanwhile sought to explain their stance on the mass grave in Tuam.

“There’s a lot of speculation as to what went on in The Home following these recent revelations” said Monsignor Sean Green, spokesperson for the Irish branch of the Catholic Church Scandal Containment Unit, “people seem to believe that because these children were born to unmarried mothers in the church at the time considered them sinful and unworthy of a decent Catholic burial, so basically threw their little remains into the nearest hole they could find”.

“But trust me, that wasn’t the case; I assure you, those bodies are just resting in that mass grave. Cover up the mistreatment of children? Not at all. We’ve always planned to exhume them and bury them properly, and we’re going to get right on it really soon”.

To donate to the memorial fund, which will see a plaque erected with all 796 names written on it contact [email protected] To see a list of the people who can demand justice and bring about accountability in this case please consult the nearest phone book or the latest census.