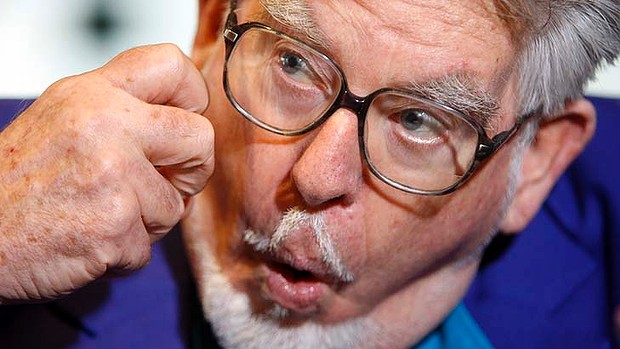 VETERAN entertainer Rolf Harris is feeling the brunt of today’s cut-throat entertainment marketplace, after it was revealed that the Antipodean octogenarian has been forced to dramatically reduce his fee for performing at children’s parties.

Having gained fame for his singing career, which included such hits as Tie Me Kangaroo Down, Two Little Boys, SHHH! Don’t Tell Yer Mum! and Stairway To heaven, Harris was once the single most sought after children’s entertainer in Great Britain, a position bolstered by the success of his art shows Rolfs Cartoon Time, Rolfs Secret Paintbrush, and Rolfs Cartoon Hour.

At the height of his fame Harris commanded four-digit sums for appearances at birthday parties and family functions but these days an appearance by the wobble-board enthusiast at your kids school will cost you a lot less, as discussed by Harris’ agent in this exclusive interview with WWN.

“The past few years have hit Rolf in the wallet pretty hard” said John Hand, one of three chief bookers at Three Talent Agency.

“We’re putting it down to the sheer amount of children’s entertainers available today, plus the fact that my client Rolf Harris has not had a hit song or TV show in some time. Despite his advancing years, he is very eager to continue working, and as such we’ve had to cut his fee to ensure bookings”.

The talent agent went on to outline what a prospective customer could expect from a Rolf Harris performance at their children’s party, which at last pricing would set you back approximately £150, although that figure is decreasing on a daily basis.

“Mr. Harris is still spry enough to perform all of his hits on such instruments at the wobble board, the down-under flute and the didgeridoo” said Hand, leafing through a diary which showed a lot of available dates.

“Kids will then be treated to an art show, along with the famous ‘can you tell what it is yet?’ drawing game. There’s a special no-parent half hour where Rolf teaches the kids a secret new version of Jake The Peg, followed by a sing-along and a slide show from Animal Hospital. Bookings are now available from £120, or nearest offer”.